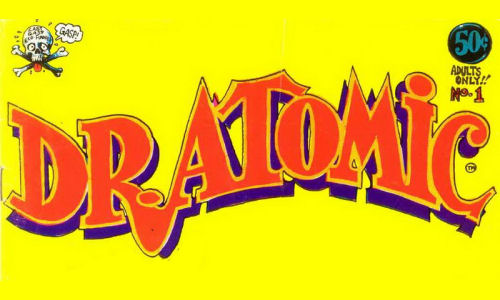 Last Gasp (1972-81)
Unlike the purely anti-drug comic book undergrounds from the 1970s (e.g., Dope Comix), Larry Todd’s Dr. Atomic celebrates the joys and adventures associated with the magical herb of marijuana. Along the way, we are challenged to comprehend the myriad scientific inventions and concepts offered by Dr. Atomic throughout this series. Everything is presented with a wry sense of humor with splashes of slapstick comedy and inventive sight gags.

Dr. Otto Atomic first appeared in The Sunday Paper, an underground newspaper of the early 1970s. The first issue reprints strips that appeared in the tabloids, including two major stories; “Dr. Atomic and his Spaceship” and “Dr. Atomic Meets The Space Brothers.” Ironically, there is no dope smoking to be found in the inaugural issue.

The second issue really sets the tone for the rest of the series, as Dr. Atomic and Billy join up with “Crazy” Crosby on a journey to “The Giant Grass of Bangagong Valley.” The writing is inventive and funny and the artwork ranks with the best of Larry Todd. Dr. Atomic #2 is an unheralded minor underground classic that was probably a bit lost in the flood of drek that came out in 1973, though it did enjoy several richly deserved reprintings.

The remaining four issues provide similar adventures, with the notable exception of the Dr. Atomic #4, subtitled The Pipe and Dope Book. This issue was published shortly after Todd’s infamous 1974 special edition one-shot, Dr. Atomic’s Marijuana Multiplier, which provides detailed instructions for enhancing the quality of cheap, low-grade marijuana. The instructions are fairly complex and include volatile chemical recipes that should be approached with caution. The Pipe and Dope Book on the other hand, is considerably more benign, offering timeless information and advice about the consumption and cultivation of marijuana and instructions for building some elaborate home-made smoking devices.