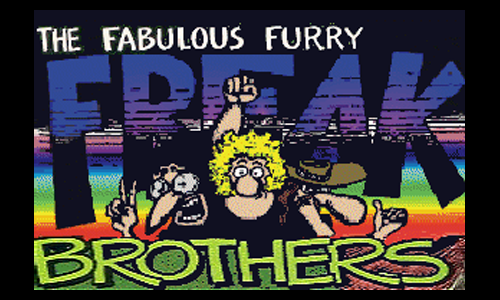 Rip Off Press (1971-2004)
Long before starring in their first solo comic book in 1971, Gilbert Shelton’s Fabulous Furry Freak Brothers were already a widespread, wildly popular counterculture phenomenon. The trio of pothead hippies (and not actually brothers) made their first public appearance in 1967 in the Austin Rag, a local Texas underground newspaper, and were soon appearing in alternative press publications all over America through the Underground Press Syndicate (essentially a file exchange network of over 100 underground publications, which included the Austin Rag itself as its sixth member).

Beyond the innate brilliance of Shelton’s comics, the fortuitous timing of his creation of the Freak Brothers with the sudden, widespread utilization of an underground press syndicate in major media markets was a significant factor in Gilbert Shelton’s own success story. Shelton already had one popular underground cartoon character, Wonder Wart-Hog, but the Wart-Hog’s popularity paled in comparison to what the Freak Brothers would achieve.

In 1968, flush with the sudden success of the Freak Brothers but still living in Austin, Texas, Shelton bought and read the first issue of Zap Comix. Before reading that Zap, he had minimal interest in comic books, thinking that the most natural format for underground comic strips was in tabloid newspapers. But after reading Zap #1, Shelton was inspired to produce his own comic book featuring the Freak Brothers. He gathered existing strips, added some new work, and Feds ‘n’ Heads Comics was printed later that year in a garage in Austin, on the same type of press used by Don Donahue for Zap. Feds ‘n’ Heads was an instant success and Shelton shifted the second printing of the book to the Print Mint in February, 1969. 12 more printings would follow in the next decade.

By 1970 the Freak Brothers were a national media phenomenom, and Shelton was contributing Freak Brothers strips to the L.A. Free Press on a weekly basis. Within a few months he had enough strips to combine with older stories for Rip Off Press (which Shelton had co-founded) to print the debut issue of The Fabulous Furry Freak Brothers. The first issue was enormously popular, selling about half a million copies in ten printings, which were printed so closely together they all had 50-cent cover prices. However, this was merely the tip of the iceberg, as today it is estimated that the Freak Brothers have sold over 40 million total books worldwide.