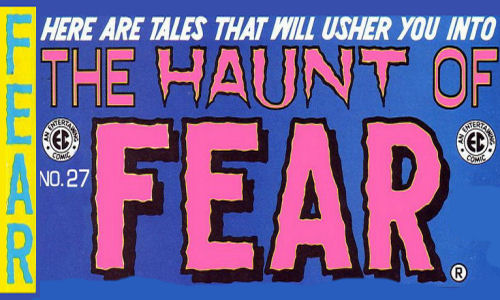 EC Comics (May-June 1950 – November-December 1954)
The Haunt of Fear was an American bi-monthly horror comic anthology series published by EC Comics in 1950.[1] Along with Tales from the Crypt and The Vault of Horror, it formed a trifecta of popular EC horror anthologies. The Haunt of Fear was sold at newsstands beginning with its May/June 1950 issue. It ceased publication with its November/December 1954 issue, compiling a total of 28 issues.

Having had great success with the Crypt of Terror (Tales from the Crypt) and Vault of Horror, EC’s William M. Gaines decided to convert their Western title Gunfighter into a new horror title, Haunt of Fear. When the Haunt of Fear began publishing in the middle of 1950, it used the old Gunfighter series’ numbering for its first three issues (#15, #16, and #17 respectively) before switching over to its own numbering with issue #4.

Haunt of Fear featured classic tales of horror, full of faithless spouses who met gruesome ends, ax murderers, vampires, and other things that go “squish” in the night. These were narrated by Old Witch, Vault-Keeper, and Crypt-Keeper, hosts of EC’s other horror titles. The stories tended to be gory morality plays, but that didn’t stop them from incurring the wrath of Dr. Wertham, who featured episodes from this series prominently in his anti-comics work, Seduction of the Innocent.

In 1950, publisher Gaines and his editor, Al Feldstein, discovered they shared similar tastes in horror. They first began experimenting with horror tales as features in their existing titles, such as Crime Patrol, which was briefly retitled Crypt of Terror and finally Tales from the Crypt, by which point the horror genre had become predominant. (In the early 1950s, comic book publishers, seeking to save money on second-class postage permits, frequently changed the titles of their comics, rather than start new ones at “#1”). An EC Western comic book series called Gunfighter (which itself had originated with #5, having adopted the numbering from Fat & Slat) was similarly rechristened Haunt of Fear with issue #15. The Haunt numbering was reset after #17 (3), as explained in the letter column of issue #4: “After publishing issues 15, 16 and 17, the United States Post Office requested that the fourth issue actually be numbered No. 4 rather than No. 18… Well, ‘ya can’t fight City Hall!'” (The EC war comic Two-Fisted Tales took over the old Haunt numbering, starting with issue #18, and itself never ended up resetting). For this reason, even within the same original 1950s series, there are actually two separate issues each of Haunt of Fear #15, 16, 17.