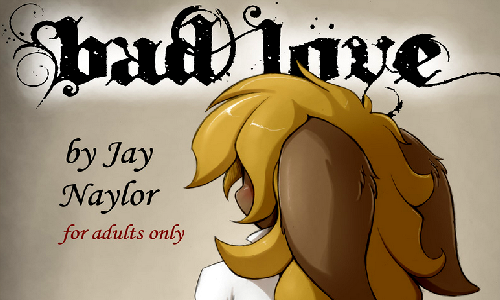 JayNaylor.com (2003-09)
In 2003 Naylor created the webcomic Better Days, which focused on the development of Fisk as he grew up in Georgia.

Naylor’s second webcomic, New Worlds, was set in an 18th century fantasy world. An adult comic featuring New Worlds characters, Mercedes & The Wolf, was also produced. Naylor abandoned the comic in the middle of a chapter, and has stated he plans to eventually rework the story from the beginning to be less of a comic and more of an illustrated novel. Naylor also created the non-furry science fiction war comic Hell For Humanity, which was abandoned in 2006.

In 2007, Naylor began producing the adult series Huckleberry Ann, which loosely parodied Adventures of Huckleberry Finn. Another adult series, Haukaiu the Hero, was based upon the Lutrai species created by Ollie Canal. Fans of Ollie’s comics criticized Naylor’s Objectivist-themed take on the setting. Naylor countered by stating that Ollie gave his permission for Naylor to use the species, but never stated whether Ollie approved of the storylines. Naylor ended the series after a while, claiming that he dislikes working with characters that he didn’t create. In 2008, Naylor began Fall of Little Red Riding Hood, inspired by Little Red Riding Hood.