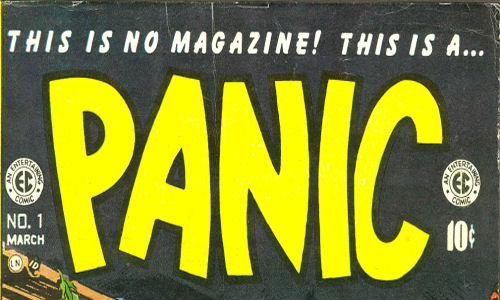 EC Comics (1954-56)
Panic was part of the EC Comics line during the mid-1950s. The bi-monthly humor comic was published by Bill Gaines as a companion to Harvey Kurtzman’s Mad, which was being heavily imitated by other comic publishers.

Panic was edited by Al Feldstein (who became the editor of Mad a few years later). Beginning with its first issue (February–March 1954), Panic had a 12-issue run over two years. Feldstein was the primary cover artist, with stories illustrated by Jack Davis, Will Elder, Jack Kamen, Joe Orlando, Basil Wolverton and Wally Wood. Some story ideas were by Nick Meglin, later the co-editor of Mad. Scripts were by Feldstein, Elder and Jack Mendelsohn, later a co-screenwriter of Yellow Submarine (1968) and an Emmy-nominated TV comedy writer.

EC dubbed Panic the “only authorized imitation” of Mad, but Mad’s creator didn’t enjoy the joke. Almost thirty years later, Harvey Kurtzman told an interviewer, “Panic was another sore point. Gaines, by some convoluted reasoning, decided to double the profit of Mad by doing a Feldstein version of Mad and he just plundered all of my techniques and artists. For this there was a real conflict of interests.”

Publisher Gaines rejected Kurtzman’s complaint, telling an interviewer decades later:
“Sometimes Harvey loses sight of the fact that this was my business, that I was publishing these magazines, that one of my magazines was Mad, that I had a lot of other magazines making more or less profits, some of them none, and what’s so immoral about me putting out another magazine imitating my own magazine? You see Harvey could never realize that Mad was mine; he thought it was his. That was the basic problem. To me Mad was one of the EC Comics. If we put out Vault of Horror and it’s successful, what’s wrong with putting out Tales From the Crypt? If we put out Mad and it’s successful, what’s wrong with putting out — all the time we put out Panic, Harvey felt we were competing with him, and I used to say, “Harvey, we’re not competing with you, we’re all one company. [Laughter.] The money comes from everywhere and it goes into a pot and from this pot we publish.” Why am I competing?