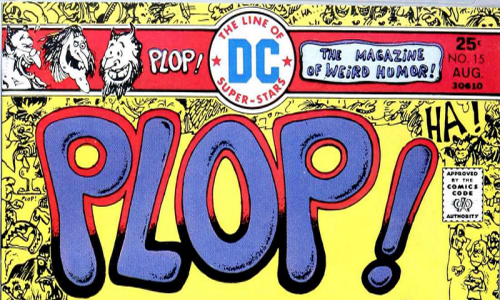 DC comics (1973-76)
Plop!, “The New Magazine of Weird Humor!”, was a comic book anthology published by DC Comics in the mid-1970s. It falls into the horror / humor genre. There were 24 issues in all and the series ran from Sept./Oct. 1973 to Nov./Dec. 1976. This was a different beast than the usual underground comics because it was published by giant DC Comics instead of a small house like Rip-Off Press or independently, as many were.

Each issue was centered on a frame story starring three ghoulish characters with biblical names: Cain, Abel (previously introduced in House of Mystery, and House of Secrets) and Eve. An issue would typically contain a story told by each of the characters, each bidding to outdo the others in fiendishness.

Stories for Plop! were generally created in one of three ways. The most common was that Steve Skeates would write the stories himself, using the full script method. Due to a brief feud with editor Joe Orlando, for a time Skeates’ stories were written under the pseudonym Chester P. Hazel. The second way was using plot ideas submitted by readers of the anthology. Orlando would select which plot ideas would be used, and Skeates would then write the full story. The third way was that Aragonés would write the plot, and someone else would write the script once the story was fully drawn