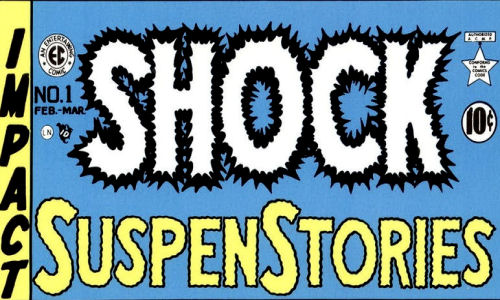 EC Comics (1952-55)
Shock SuspenStories originated in early 1952 as a “sampler” featuring stories of various genres. Gaines and Feldstein explained the comic’s origin and the source of its title in the first issue:

We’ve tried to satisfy every one of you readers who have written us insisting that EC increase its output! Many of you wanted another science-fiction mag… you horror fans wanted another horror book… and you suspense readers wanted a companion mag to Crime SuspenStories! We decided, therefore, to make this new mag an “EC Sampler” …and to include in it an S-F yarn, a horror tale, a Crime SuspenStory, and… for you readers of Frontline Combat and Two-Fisted Tales… a war story! Although there was a wide variance in the types of mags requested, all of you fans seemed to agree on one thing: all of you wanted the stories to have the usual EC shock endings! So what could be more natural than to call the magazine Shock SuspenStories?

It was evident from the cover of #2 that Gaines had conceived this title for matters of deeper concern. With “Patriots”, the “Shock SuspenStory” was born. And far from being just a label of meaningless hype, the concept proved to be a major step for EC, providing Gaines and Feldstein with a forum for expressing their views on the human condition just as Two-Fisted Tales and Frontline Combat were for Harvey Kurtzman. The Shock SuspenStory was characterized by a running theme of mob violence and an art style best described as Heightened Realism. A similarity can be noted between Wood’s dramatically effective Shock renderings and the caricatures of corruption in the acclaimed fine art of Jack Levine.