TALES FROM THE CRYPT 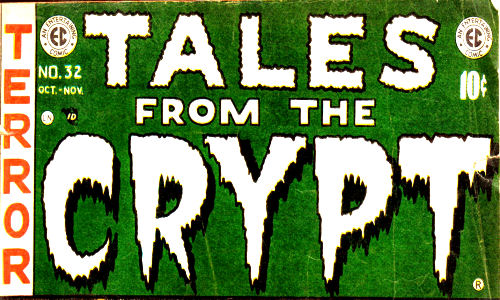 TALES FROM THE CRYPT & CRYPT OF TERROR

Here we present the Crypt of Terror and Tales from the Crypt titles (#17-46), which are consistent with the horror theme of the series, having been mostly a crime story series previous to #17. EC, as other companies, didn’t always start new titles with #1, preferring to continue an existing title’s numbering even if the series shifted focus as well as title.

Along with its sister titles, The Haunt of Fear and The Vault of Horror, Tales from the Crypt was popular, but in the late 1940s and early 1950s comic books came under attack from parents, clergymen, schoolteachers and others who believed the books contributed to illiteracy and juvenile delinquency. In April and June 1954, highly publicized Congressional subcommittee hearings on the effects of comic books upon children left the industry shaken. With the subsequent imposition of a highly restrictive Comics Code, EC Comics publisher Bill Gaines cancelled Tales from the Crypt and its two companion horror titles, along with the company’s remaining crime and science fiction series in September 1954. All EC titles have been reprinted at various times since their demise, and stories from the horror series have been adapted for television and film.

TALES FROM THE CRYPT