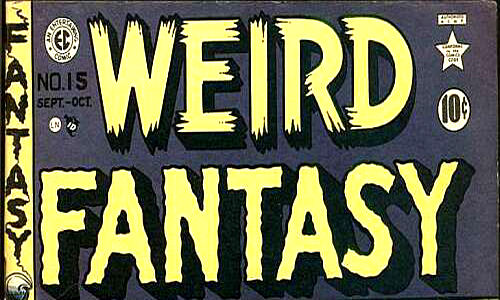 EC Comics (May 1950-Dec 1953)
Weird Fantasy is a science fiction anthology comic that was part of the EC Comics line in the early 1950s. The companion comic for Weird Fantasy was Weird Science. Over a four-year span, Weird Fantasy ran for 22 issues, ending with the November–December 1953 issue.

Artist/writer Harry Harrison claims credit for originally turning Gaines on to the idea of publishing science fiction. Harrison has stated that he and fellow artist Wally Wood were interested in science fiction and supplied Gaines with a lot of science fiction material to read. Harrison had no editorial control over the contents of the comic aside from his own stories, and he left EC by the end of 1950.

Cover illustrations were by Feldstein with the exception of two by Joe Orlando, one collaboration by Feldstein and Al Williamson, plus another collaboration by Williamson with Frank Frazetta. Artists who drew stories for this EC title were Feldstein, Frazetta, Williamson, Orlando, Wally Wood, Harvey Kurtzman, George Roussos, Harrison, Reed Crandall, Will Elder, Bernard Krigstein, Jack Kamen, John Severin and Mac Elkin. Writers in the early issues included Feldstein, Gaines, Kurtzman, Harrison and Gardner Fox. Gaines and Feldstein wrote nearly all stories from 1951–53.

EC’s science fiction comics were never able to match the popularity of their horror comics like Tales from the Crypt, but Gaines and Feldstein kept them alive using the profits from their more popular titles. In the EC Library reprints, comics historian Mark Evanier theorizes that the short story format, where no story was longer than eight pages helped contribute to poor sales because the horror comics were much better suited for very short stories with shock endings than the science fiction comics. Evanier also ponders whether the very similar logo style of Weird Science and its companion comic Weird Fantasy as well as similar cover subjects contributed to lower sales due to customers thinking they already owned the issues on sale. Historian Digby Diehl wondered whether having host characters like EC’s horror comics would have helped the comics be more commercially successful.

When the poor sales became too much to handle, Weird Science combined with companion comic Weird Fantasy in 1954 to become Weird Science-Fantasy. As discussed in an “In Memoriam” feature in the final issue, it was stated that every issue for the previous year and a half lost money and they had no choice but to combine the two comics into one. Weird Science-Fantasy ran for seven issues before a title change to Incredible Science Fiction for four issues.