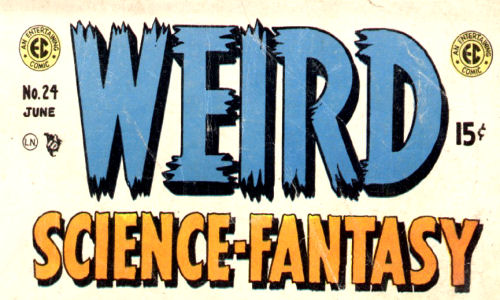 EC Comics (March 1954-July 1955)
Weird Science-Fantasy was an American science fiction-fantasy anthology comic, that was part of the EC Comics line in the early 1950s. Over a 14-month span, the comic ran for seven issues, starting in March 1954 with issue #23 and ending with issue #29 in May/June 1955.

The comic, published by Bill Gaines and edited by Al Feldstein, was a merger of two previous bi-monthly titles, Weird Science and Weird Fantasy, which ran from 1950 to 1953, both ending at issue #22. Because of the losses suffered from those two comics, Gaines and Feldstein combined the two into a single comic, published quarterly and priced at 15 cents. The price would be lowered back down to 10 cents after the first two issues. The comic reverted to a bi-monthly schedule with issue #27 in January/February 1955. In the summer of 1955, there was yet another title change as Weird Science-Fantasy became Incredible Science Fiction for the final four issues.

The final issue featured a cover by Frank Frazetta originally intended for a Famous Funnies cover illustrating Buck Rogers, but it was considered too violent for that comic book. Gaines bought the rights to use the cover (the only instance at EC where Gaines bought only the rights to the art, and not the art itself), and it was used with some minor revisions. The cover was later described by publisher Russ Cochran as “the most outstanding cover ever put on a comic book”.