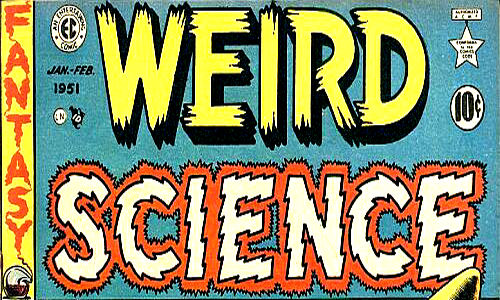 EC Comics (May 1950-Nov 1953)
Weird Science was an American science fiction comic book magazine that was part of the EC Comics line in the early 1950s. Over a four-year span, the comic ran for 22 issues, ending with the November–December, 1953 issue. Weird Fantasy was a sister title published during the same time frame.

Published by Bill Gaines and edited by Al Feldstein, the bi-monthly Weird Science replaced Saddle Romances with the May/June 1950 issue. Although the title and format change took effect with issue 12, Gaines and Feldstein decided not to restart the numbering in order to save money on second class postage. The Post Office took note and, starting with issue #5, all the issues were numbered correctly. Because of this, “Weird Science #12” could refer to either the May/June 1950 issue, or the actual 12th issue published in 1952. The same confusion exists for issues #13-15, #15 being the last issue published before EC reset the numbering.

Artist/Writer Harry Harrison claims credit for originally giving Gaines the notion of publishing science fiction. Harrison has stated that he and artist Wally Wood were interested in science fiction and gave Gaines science fiction stories to read. Harrison, however, had no editorial control over the contents of the comic aside from his own stories and left EC by the end of 1950.