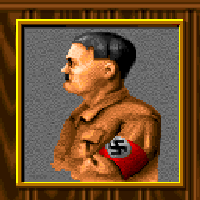 Here is a list of the cheat codes from DOOM. During play, just type the codes in with the keyboard. You need not hit ENTER after the code. After entering, a message should be displayed at the top of the screen telling which cheat mode was activated or toggled on/off.

Most of the info here is from “The UnOfficial Doom FAQ” To download the text file with everything you could ever possibly want to know about Doom and Doom ][, click here: Dmfaq66.zip 125k All thanks to Hank Leukart.

11 195 [fce00000,f0340000] ( -800, -4044)
Go the building in the southwest corner of the map. At the south end, you will find some stairs going east (unless you haven’t hit the switch to raise them). At the top of the stairs is a secret door to the east, revealing a small area (#9) with a teleporter to the top of the square spiral staircase building northwest of the diamond-shaped building. I was not able to get credit for secret #9, even if I walked into the teleporter; so the most I could get for this level is 90% secrets.

Instead of taking the teleporter, you could go to the top of the building to the ledge looking north. Hit the switch on the west wall, then jump down to the ground and go back through the front door of the building. Go into the acid river and follow it north to the lift, which takes you up to another ledge where you’ll find a plasma gun and ammo (#10). Now go back to the south end of the building and go south through the acid river tunnel. If you got secret #4, there will be a secret door leading south in the tunnel (#11) leading to a teleporter to the secret level (level 31). 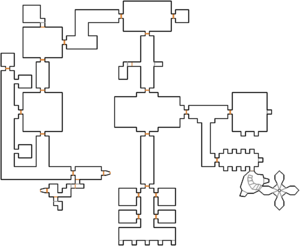 Once in the final room, you can either flip the exit switch in front of you, which takes you to MAP16: Suburbs (D), or see below for instructions to the super-secret level, MAP32: Grosse (the process to reach the super-secret exit exactly matches how the secret level in the first episode of Wolfenstein 3D is reached). 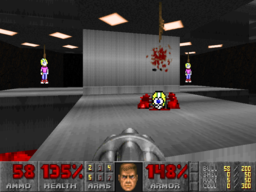 MAP32: “Grosse” is the second secret map of Doom II and can be accessed from MAP31: Wolfenstein. It was designed by Sandy Petersen and uses the music track “The Ultimate Challenge”. Like “Wolfenstein”, “Grosse” is a remake of a level from id Software’s earlier release, Wolfenstein 3-D, namely the level of the same name from the end of that game’s first episode. Also like “Wolfenstein”, “Grosse” features the secret level-exclusive Wolfenstein SS enemy, though the boss that appears in the original map, Hans Grosse, has been replaced with a Cyberdemon. Additionally, the exit area, which is different from that of the original level, features cameos from id’s even earlier game, Commander Keen, in the form of four versions of that game’s titular protagonist who must be shot and killed by the player in order to reveal the level’s exit switch.