All Your Base Are Belong to Us – Zerowing FAQ

Obama is the worst possible sort: a profoundly vain ignoramus

We watched Harry Sellick’s Coraline last night (very easily torrented for the pirate minded). Pretty good, a bit scary for the 3 year old (he was clinging pretty tightly in one section, we kinda regretted getting him into it, but he wailed when we tried to turn it off or skip part, and it had a happy ending).

But the thing is, we were struck by similarities to American McGee’s Alice. First off, a lot of the design is in the same general artistic vein, and the reference point of the story, as well as plot points are also very much “inspired”, shall we say, by the Through the Looking Glass story to begin with.

The attitude of the protagonist is very much related, but mostly what was uncanny was the character of the Cat, which owes a great deal to McGee’s Cheshire. We’d be very surprised if Coraline’s cat was not very much influenced by McGee’s portrayal.

The same smooth, understated delivery, giving the girl very subtle, mysterious or ambiguous hints, even the same voice tone and timbre (although McGee’s had a British accent and Coraline’s is American actor Keith David, best remembered for his fist fight with Rowdy Ronny Piper in They Live). It’s physical appearance was very like as well (even the notched ear, although it lacked the Cheshire’s earring). The sinuous way it moves is probably indigenous to cats, as well as the lean, sinewy look (the cat in Bolt looks like this as well), but the mood and attitude are very similar.

And yes, I was a first person shooter girl who kicked ass in Doom/Quake deathmatchs in middle school. 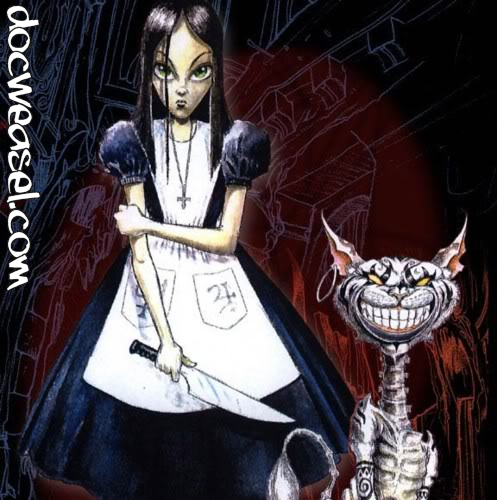