Death of a presidency 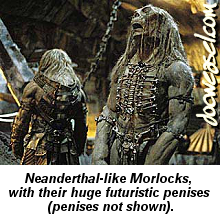 via AOSHQ : Scientist: Mankind Will Evove Into Two Separate Species, Supermen And Goblins

The Daily Mail quotes a “scientist” predicting the fate of the human race. Apparently he’s going with the “Gods and Clods theory” that half will descend, physically, mentally, and aestheticallyl into a sub-species of troglodytes that exist only to serve the elite, beautiful people with all the brains and pert breasts.

The human race will one day split into two separate species, an attractive, intelligent ruling elite and an underclass of dim-witted, ugly goblin-like creatures, according to a top scientist.

100,000 years into the future, sexual selection could mean that two distinct breeds of human will have developed.

The alarming prediction comes from evolutionary theorist Oliver Curry from the London School of Economics, who says that the human race will have reached its physical peak by the year 3000.

These humans will be between 6ft and 7ft tall and they will live up to 120 years.

“Physical features will be driven by indicators of health, youth and fertility that men and women have evolved to look for in potential mates,” says the report, which suggests that advances in cosmetic surgery and other body modifying techniques will effectively homogenise our appearance.

Men will have symmetrical facial features, deeper voices and bigger penises, according to Curry in a report commissioned for men’s satellite TV channel Bravo.

Women will all have glossy hair, smooth hairless skin, large eyes and pert breasts, according to Curry.

Racial differences will be a thing of the past as interbreeding produces a single coffee-coloured skin tone.

The future for our descendants isn’t all long life, perfect bodies and chiselled features, however.

While humans will reach their peak in 1000 years’ time, 10,000 years later our reliance on technology will have begun to dramatically change our appearance.

I don’t think he mentioned the bigger penises and pert breasts part though.

Advances in surgery will probably make it possible to give newborn girls implants that will grow throughout out their lifetimes, keeping their breasts supple and able to withstand years of everyday usage.

The large penises will obviously be a result of the many pills, oils, lotions and pumps readily available on the internet today that “add inches to your wang for her pleasure”, plus the addition of Cialis and Viagra into everyone’s daily diet.

In The Time Machine

In the year AD 802,701 humanity has evolved into two separate species: the Eloi and the Morlocks. The Eloi are the spoiled, attractive upper class, living in luxury on the surface of the earth while the Morlocks live underground, tending machinery and providing food, clothing and infrastructure for the Eloi. Each class evolved and degenerated from different social classes as humans, a theme that reflects upon Wells’ sociopolitical opinions.

The name ‘Eloi’ may be derived from the ancient Greek word ‘Eleutheroi’, which referred to free men, or men of leisure. Perhaps irrelevantly, the word ‘Eloi’ is the Aramaic for “my God”, found in Mark 15:34.

The main difference from their earlier ruler-worker state is that while the Morlocks continue to support the world’s infrastructure and serve the Eloi, the Eloi have undergone significant physical and mental deterioration. Having solved all problems which required strength, intelligence or virtue, they have slowly become dissolute, frail animals. While one initially has the impression that the Eloi live a life of play and toil less abundance, it is revealed that the Morlocks are tending to the Eloi’s needs for the same reason a farmer tends to cattle – because the Eloi compose most (if not all) of the Morlocks diet and the Eloi are no longer capable of acting in any other role than to be eaten by the Morlocks.

In the 2002 movie adaptation to the Time Machine, the Eloi have lost all motivation and ambition for the future, and no memory of the past, only living for pleasure. Strangely, they seem to live in great vertical houses, and play with great windmills, though they may be built by the Morlocks.

So, there will be beautiful people, but the Morlocks will eat them all up. I think I’d rather be reincarnated as a well-hung Morlock (with pert breasts)