Do It ’til You’re Satisfied (whatever it is)

team dwf: last thoughts before the votes come in 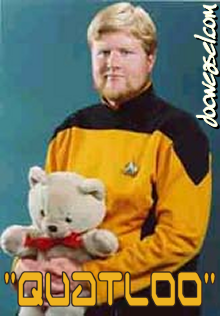 Having been a denizen of web forums since the old Usenet days, I know what an self-righteous smug little prick some small-dicked nobody can be when handed a little authority for having the supreme advantage of having signed up before you did. Nowhere on the net is this as evident as on the supposed “reference” site, Wikipedia, which presumes to be the be all and end all of knowledge on the internet today.

Author John Scalzi had a brush with the imperious stupidity of Wiki when he tried to add the fact of his personal friend’s death to the friend’s entry- only to be thwarted by a buffoon going by the net handle of Quatloo (a Trekky? it would explain a lot) who didn’t think that a personal friend, who had received word through the next of kin, was enough for Wiki’s stringent procedures.

The person (Harlan Ellison) who had told Scalzi had to first notify an online mag, Locus, which then printed a post, which was then deemed worthy.

The exchange between Scalzi and the asshat calling himself Quatloo is hilarious, and his defense by other dense Admins underscores the worthless pig-ignorant thick-headed vapidity that typifies Wikipedia.

This is exactly why it remains a good source for facts about ’80’s vid games and sitcoms, and that’s about it.

Scalzi does a good job of eviscerating the half-wit Quatloo but the guy is too stupid to know he’s being owned. Quatloo slogs on dutifully, doddering, dim-witted and stunned like a duck hit over the head, repeating the same refrain at the end as he did in his first post; “If’n I cain’t copy/paste it from another source, how can you prove it’s real?

As Wikipedia, like a cat, likes to bury its shit to hide the stench, so Admins will soon delete the entire exchange as “uncivil” or “getting personal”, so read it while you can. However, let us immoralize the name Quatloo to hereafter and forever stand as a synonym for an officious, bumbling, pig-ignorant, malodorous, toffee-nosed, dick-eared, gap-toothed illiterate adherent to rules he neither understands nor would believe if he could understand them, but is only exercising his “power” because he thinks it adds inches to his dick, which in any case is irrelevant, because anyone that involved with 40 year old teevee sci-fi doesn’t get laid unless he pays for it.

Quatloo‘s personal page notes the highlights of his entry adding career at Wiki:

Example of future use, which I will immediately submit to Urban Dictionary

Quatloo noun Officious, sanctimonious, power-mad prick-nosed get who insists on adherence to rules he neither understands nor uses in correct context, but does so only to embiggen himself above those over whom he has some superficial power.

You stupid fucking Quatloo, why do I have to use form BLP:1KJ2345KLLKJ just to take a shit?”