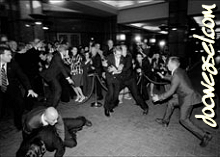 I didn’t make it to the movies to see Grindhouse. The one night I probably could have gone, my gf wasn’t in the mood to sit through a three-hour schlock-fest.

The fact is, she never is in that mood. And the only time I go to the movies is with my gf. I’m not going to go to a movie alone. I did rook her into going to 300 and she was pretty unhappy.

Anyway, I had to wait until Grindhouse came out on DVD so I could buy the movie at Amazon.

I didn’t write a review at the time. Today I felt like some background wallpaper noise so I stuck in the “DvD” I’d purchased and let it run.

I’d read a lot of reviews before it came out, because yes, I’m a Tarantino fan. I think his best movie was Jackie Brown, which I’ve seen literally hundreds of times, although that’s probably his least successful movie, commercially.

I work online all night almost every night, and play movies in the background like some people listen to CDs- if it has great dialog and scenes its as good as listening to music- the timing, the color, the dynamics.

Anyway, I remember everyone raving over Rodriguez’ half, Planet Terror, because it had more action and was more over the top. People complained Tarantino’s half was too talky and took too long to go anywhere.

Well, I doubt I’ll watch Death Proof hundreds of times, but I think it holds up better under multiple viewings (or listenings, I can glance at the screen to my left if I want to look for a second, I can touch-type of course).

The dialogue is funny as hell, for one thing. And its got a cool attitude, like Jackie Brown, you are hanging out with the characters while they just chill, or party, or raise hell. That’s a hell of a lot harder to write and keep interesting than a gross-out zombie shooting movie. Plus, that’s been done to death, to death. Its like 5th generation been done to death. Having it play as a Z-movie cheapo doesn’t make it any more original.

He could at least have put some kind of cool twist in, like Tarantino and he did in From Dusk til Dawn.

The first time I saw that one, I was actually caught off-guard when Salma Hayek turned into a vampire, even though I knew it was going to happen.

Back to Death Proof, Tarantino writes all this great dialogue that I wish girls I knew talked like. Not only are they macho, into cars, partying hard, drinking hard and playing the dozens on each other constantly, they are (almost) all smokin’ hot.

He does fudge a bit and for some reason, probably because Tarantino loves to kiss up to his actresses, makes them all macho and hard-ass, but chaste as churchmice.

The only sex any of them ever admit to is kissing and hand holding. Like, wtf is that? Rodriguez only had 1/10th the hot chicks in his movie (I mentally applauded when Fergie Fug died after about 2 minutes of screentime and 2 lines of dialogue) and he got some skin and sex in.

I read somewhere that Tarantino said he’s afraid to put any sex in his movies because he’ll reveal what a sick pervert he is. His writing reveals too much. He said another time that if the piece you write is honest, you should be embarrassed to let a friend read it, because there’s so much of your hidden self in it.

The only sex in any of his films that I remember is a 15 seconds of DeNiro fucking Bridget Fonda in a semi knee-trembler. That and the rape scene in Kill Bill, which wasn’t too sexy. There’s some baby-talk kissy face in Pulp Fiction between Bruce and his French girl, but no real sex or even sexiness.

There weren’t even any female roles (other than victims) in Reservoir Dogs. Well, other than a part for Nina Siemaszko as McKlusky -the only female speaking role, in a scene that was left on the cutting room floor (its in the DVD extras).

Some people might have found Uma sexy in her role as Mrs. role, I guess. I didn’t, I was too into the story and if she had just fucked Vincent it would have been a let-down.

Tarantino probably writes chick dialogue the way he thinks guys wish chicks talk, but the girls I know are the exact inverse of the blabber in Death Proof. They never talk about cars and old car chase movies and all the interesting guy stuff the girls in this movie talk about.

Anyway, as interesting as Death Proof is as movie dialogue, it is the direct opposite of the way girls I know IRL talk. I think I prefer hearing (or over-hearing, as in my gf on the phone of 2nd hand conversations she had with a friend) them talk about sex than cars.

Also, there’s a glitch when Tarantino does get to the action- why doesn’t she just slow down and pull over instead of trying to out run him, almost killing her friend in the process? That is just a dumb device. He should have made her brakes go out or gas pedal lock up or something. There’s no good reason why she doesn’t just pull over, she’s got the fucking gun!

But over-all, I think it stands up better than Planet Terror. I hope his next project is a more serious effort, though.