Dancing With the Devil in the Light of the Moon

The Captain, whom I respect, sadly joins the race-baiting, nativist, disgusting Michelle Malkin (but assures us working with scumbags won’t affect his work)

"Death of a President" is lefty snuff pr0n

Vonda Sheppard is a horrible singer. 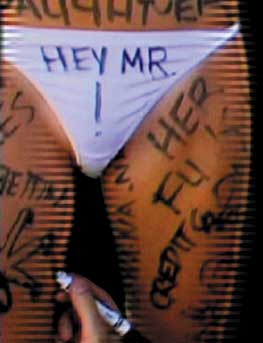 They’re … very energetic and they live to have a good time on the stage, and it comes across when they’re playing songs like “Beat Me” or “Mess.” Also, they were around outside signing autographs and talking to people at great length about the show, the band’s history, and anything else they wanted to talk about.

This was, to say the least, a strange show. No one knew what to expect from Custom because many only knew about his big single “Hey Mister.” In fact, except for the station sponsoring the show, no one has been playing the new single, “Beat Me.” But 96X sponsored the show, and they made it an exclusive show: you had to win tickets from them or else get them at a ticket dump or something, and it would be an intimate show due to the venue being so small. I had been guestlisted by winning tickets, but I had no clue what to expect. I found out though, that’s for damn sure.

For better or worse, I didn’t get to see Driven. Seeing as most local bands who open for someone national are pretty bad, maybe that was a good thing. At around 9:30, the man known as Custom came to the stage. Let it be known that he is a huge person. Easily a head and a half taller than I am, and I’m not really short, so that is a big factor in seeing Custom. But he got on the mic and said “Shouldn’t Bob and Mike do something here?” Bob and Mike are the two radio personalities who do the midday shift on 96X, and they have a band called Pavillion. I guess Custom got wind of this and he invited them up to do a song with Custom’s band. I wish I could remember the song’s name, but I’ve seen it before and it benefited from the expertise of Custom’s bassist, drummer, and keyboardist. Simple, but very effective.

Then Custom came up and started his set. Opening with a song called “Piss” which was written about what Canadians do when they break up with their girlfriends. It was a cool song to open with. From there, things just got crazier and crazier. Three songs in Custom did his current single, “Beat Me,” and he invited some blazing hot girls onstage to dance. After they got off the stage he commented “I know for fuckin’ sure I’d rather watch them than me.” Everyone seemed to agree. At one point Custom started talking to the back of the club (it’s a small place) and asking for various mixed drinks. When he asked for a Cosmopolitan and the bartender started mixing one up, Custom said “I’m going back there now” and actually went through the crowd to the bar, still singing the song.

As he started drinking the drink the band reached the bridge and the bassist came out into the crowd and started jumping around, never missing a note. Fun stuff. After this, the band suddenly broke out into Jay-Z’s “Big Pimpin’” while Custom introduced the band members, one by one. The bassist got a solo all to himself, and he was damn good. When he introduced the guitarists, the band broke out “Crazy Train” from Ozzy, and they rocked out royally, then switched back to “Big Pimpin’” when Custom did a verse from the song and then they moved on to a nice little song about “piece of ass.” Then, the moment all were waiting for… “Hey Mister.”

It must be said that Custom got the crowd into it by changing the beginning of the refrain by saying “It’s not what you did, it’s not what you didn’t, God gave her a perfect body NOW VIRGINIA’S UP IN IT!” and the crowd went nuts. He also used the crowd to sing certain parts of the song and it was a very cool gesture. Sadly, it was the end of the set, but not before a big rock ending to cap the night.

Custom’s band is extremely talented and very worth noting. The keyboardist has total control over his boards, and does backing vocals while doing some intricate keyboard operations. The lead guitarist was doing some very complicated solos and had a ton of effects and used them all to great effect. The bassist must have been on speed or something because he was jumping around like there was no tomorrow while playing the basslines and shouting his backing vocals. But the drummer was very notable. He was very groove-oriented and never missed a beat (even with Mike and Bob’s song that he didn’t know). But he also was very precise with his use of that tool which some drummers overuse, some don’t see the reason for it, some are even afraid of it: double kick. He knew exactly where to apply it, how much, and how long to do it for. Just a great drummer paired up with a talented band and a good songwriter in Custom himself, who also does play guitar.

They’re also very energetic and they live to have a good time on the stage, and it comes across when they’re playing songs like “Beat Me” or “Mess.” Also, they were around outside signing autographs and talking to people at great length about the show, the band’s history, and anything else they wanted to talk about. Custom himself was very cool to talk to, even if I was straining to look at him way up there because he’s so tall. In fact, the man knows a lot more about the business than he or anyone else would let on, which is a good thing. He’s got a plan for how to make it work, and if he sticks to it, I see no reason why he won’t dominate and get big within a short time.

Nice people, energetic live show, and fun music means that everyone can find something to love in seeing Custom live. I strongly urge you, if you like music that rocks or music that’s fun to listen to, Custom is the man. It’s a nice change from bands that have music to match the singer’s emotional pain and it’s all dark and evil or else it’s music to cry along with. Custom’s music is just there to be the life of the party, and if the giant can make it happen then so much the better. I’m telling you, Custom is a great time live. Take my word, check him out. You’ll be glad you did.