Freedom’s just another word for being a fucking talentless hack 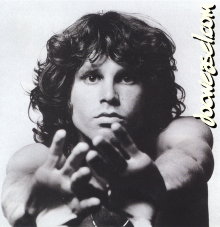 Ugh. Over at Jam Side Down this manly Manley guy is singing the praises of 3 of the most execrable frauds of the 60’s who the good luck/grace to die young so as to preserve their legends and enrich their estates.

“most talented of the ’60’s?” most over-rated, Hendrix, Joplin and yes Morrison. I seriously doubt any of them would be a force today, had they lived, or even had a long career, with the possible exception of Hendrix. I think they were in the right place at the right time, about to plateau out, and died and kept the legend alive, much like James Dean and Marilyn Monroe, 2 mediocre talents who had the good sense to die young.

Much more tragic was the death of a true talent, Tommy Bolin, or Randy Rhoads, or even someone like Jim Croce.

While we are on the subject of late 60’s non-talent, you ever listen to the Woodstock album? Outside of Santana’s percussion mania, its pretty much crap. Bad playing, out of tune instruments, bad sound, bad, sour harmonies (I’m talking to you, CSN&Y) and pretty shitty tunes all in all.

The mid-70’s produced actual talented musicians. Most of the 60’s big psychedelic American legends were (and in some cases still are) crap. The Beatles are about the only thing from the 60’s I can stand to listen to.