Deena’s Boyfriend and Mira Get to It

In Defense of Paul Anka 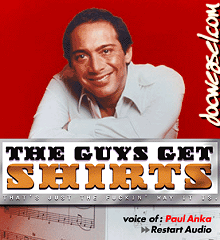 This rant by Paul Anka is quite old, but it’s classic. Ace at Ace of Spades HQ has a lot of fun with it, because it does have some great lines and unintentionally hilarious metaphors (“When I move, I cut like a fucking hammer!”). But to those who think it makes Anka look like a diva or a pompous ass, I’d like to say a few words in his defense.

Speaking as a musician, listening to the tape, Anka seems completely justified. You hear the guys admit, they fucked up. And this is apparently not the first time he’s gone over the same points. So those that say, “he’s got a point, but he could have expressed it better”- apparently he has expressed it, and they aren’t getting it, so now it’s time to crack heads. If they don’t shape up, they’re fired, as they should be. This isn’t a garage band or even a rock band, where a little looseness and a few clams here and there are not unusual. It’s a professional, traveling big band, with trained, educated musicians. They have no excuse for fucking up that badly, and when they do it repeatedly, its bullshit.

Anka also has a point that no one in the audience is going to blame the 2nd trombone for coming in late or playing the wrong part- its Anka’s rep on the line here. I wouldn’t put up with it either. As a long time leader of a band, there are times to flatter, to cajole, to manipulate, to be frank and straightforward with people, and then there are times to just kick ass because they aren’t getting it through their thick skulls. Actually, he’s cutting them slack. Some band leaders would have just fired them.

Finally, the guy who taped that is a fucking rat. There is a team spirit about a band, and in context everything Anka says makes sense and is reasonable. For this guy to talk out of school and try to make Anka look ridiculous is really shitty, and breaks that bond. Anka didn’t go public bagging on these fuckups, he told them off backstage, appropriately. To publicly air this is to betray a guy who probably gave some of these fuck-ups their big chance. I’m totally with Anka on this one. I don’t see one thing out of line he says on that tape. He probably should have fired at least one of them to get the rest of the band’s (the slackers, anyway) attention, because apparently he hasn’t been able to do so up til then. The asshole who released this never publicized, to my knowledge, who the lame players were (he was undoubtedly one of them), he just humiliated Anka, who was paying them for one of the best jobs in world and is the most blameless and professional guy in the room.

It’s his livelihood these slackers are fucking with here- long after they are gone, Anka will still be trying to book gigs and get people to buy tickets to come see him, and a lot of that is based on your recent shows. If some lamers carelessly or intentionally blow parts, it could lose you gigs, get you bad reviews, cause people to pass the next time you come to town.

I’ve had the same band name for well over a decade and a half, and have changed the line-up, one member here or there, or wholesale replacement of the entire band, for various reasons, many times. There have probably been a couple dozen members over the years; some change jobs, family life intrudes, personal issues, some just can’t cut it and are replaced. I’m the one who deals with the bar managers (we are a cover band, playing bars in the Tampa Bay area) and I’ve dealt with some of them for many years. I don’t have to play an audition, even when there are major changes, because the bosses know if the band I’m fronting plays, it will be tight, professional, entertaining.

I can’t go in a couple months after a bad outing and say:

“Hey, you know that suck-ass drummer we had? He’s gone, we’re good now, how about a booking?”

That doesn’t fly. And I’ve encountered guys who didn’t care, it wasn’t their ass on the line. Guys who didn’t do their homework and caused us wasted rehearsal time, showed up late, did drugs or alcohol to the point where they could not perform up to professional standards, guys who refused to dress appropriately for well-paying corporate gigs, guys who didn’t keep their equipment up and had it break down during a gig.

I never went on a tirade like this, its not my style. Also, in a 4 member cover band, playing for modest wages, you just can’t have bad feelings between members. Half the reason we play is to have fun, and you can’t have fun if some of the guys think you’re a jerk, even if you feel justified. I’d just replace them as soon as possible and tell them they were fired when the new guy (or gal) was ready. I feel if they aren’t making an effort to keep their job, I have no responsibility to even tell them they are being replaced. I give them notice, but once they are fired they don’t play another gig- there’s too much chance they won’t show or they’ll sabotage the show, so usually on an off week we work in the new guy and let the fuck up go.

Anka is actually doing these guys a huge favor for putting up with this crap and even giving this lecture. You know he could easily go to an agent and pull out 2 dozen replacements who can sight read and do the gig that very night, and who would be stoked to get the job. I read another account where one of the musicians defends him, saying these were young hot-shots who were dynamite soloists, but who didn’t put in the ensemble work to get tight and hit all the cues. They cut up, they ignored instructions, they hot-dogged and over-played inappropriately, they were basically unprofessional and some of them did get canned.

If anything, this tape tells me Anka is a stand-up guy who runs a tight ship. More power to him. His phrasing and metaphors are hilarious, and for that this makes an entertaining tape, but it doesn’t make him unreasonable or a big-headed star. It just shows he’s a pro band leader who expects excellence and who won’t stand for less.

That said, I don’t think this kind of rant usually gets the results you are looking for. Anka comes off as petty and angry, not in control. He probably undermines himself with the guys who aren’t slacking off by doing a general bawl-out like this, causing resentment and bad-will among the band members. He probably should have quietly talked to each guy, explained what was wrong and given them notice he’d can them if it didn’t improve. This kind of grandstanding just makes you look foolish. He probably lost his temper and just went on a rant, which happens to humans from time to time. Anka wouldn’t be a leader and a success if he didn’t have some ego, but he doesn’t really seem overly unreasonable to my ears, just a little stressed out.

However, he does it His Way, and for that I salute the man. And where the fuck is Joe?!!

UPDATE: Buddy Rich, however, does seem like a fucking prick. He may have a point, but this kind of rant isn’t going to motivate or convince anyone. If anyone talked to me like this, I’d walk, whether they were justified or not. There’s a huge difference between Rich and Anka’s rants.

Anka seems like he genuinely just wants the guys to straighten up and fly right and he’ll be happy, Rich seems like he wants to punch someone to show what a big man he is. You can tell he’s flustered and feeling like he’s made a joke of himself by the end of his rants, and it seems he fired a guy in a fit of temper whom he needed and didn’t really intend to fire by losing his temper and forcing a confrontation.

Really, there was nothing else the guy could do but basically quit or he would have lost so much face he wouldn’t have been able to look any of the guys in the eye again, if I understand right, he was the musical director and the arranger. How can he get the rest of the band to work for him when Rich has pretty much treated him like a little bitch?

Humiliating people is never a way to motivate them or get the best out of them.

Finally, I’d love to hear what either Anka or Rich had to say about these recordings, I’m sure they heard about them long ago.