Casey and the Nuns

WE ARE BAAACK!! Alison Angel 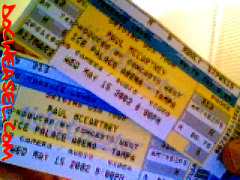 Its very gratifying that a legend like McCartney would have the musicians, stage management, production values and graciousness and class as a person to back up such amazing music. Its the gold standard, the most professional and respected act rock music has to offer.

If you aren’t a Beatles freak, or even an appreciative fan, you probably don’t get it. But the fact is, Macca’s stature is the unrivaled greatest living pop musician, performer and composer. He has put out consistantly good or great music for 40 years now, not always commercially platinum, but still on a level most bands can only dream of.

He’s recognized as the richest man in show-biz (richer than even high-rollers like Steven Spielburg or George Lucas). He’s had several careers, winning without Lennon, without Wings, without Linda. He’s even written a critically acclaimed serious classical piece, “Liverpool Oratorio”. He has nothing to prove. So why does he still tour?

Watching the concert, its evident. He’s having fun. He’s enjoying himself. He comes off as natural, unassuming, down to earth, self-deprecatingly funny, but not artificially so. He is grinning and mugging for the cameras, bopping while he jams, ad-libbing, waving his arms at the crowd, having a ball.

Some of this music is the greatest rock music every recorded, but much of it has never been done live. And the one person who could legitimately interpret it, after proving he could be successful after the Beatles, has come full circle and returned to the material he admittedly hasn’t played since he laid the tracks down 30 odd years ago.

The preshow “Circus de Soleil” performers are a bit tiresome after fifteen minutes of posturing and gymnastics and spectacle, but they are a good lead in. It’s theatre instead of some inappropriate opening act (only someone of like stature would really be welcome, and then it would kinda degenerates into oldie band night.)

Using the absurdly costumed mimes keeps the theme all part of his show, and provides a tension builder until the sillouette behind the screen, holding the violin-shaped bass, appears, crowd roaring and screaming with anticipation.

Paul has an incredible stage presence. McCartney is completely without artifice, but the crowd is his from the get-go, effortlessly.

Breaking into a spot-on version of a new (to this tour, or any of his tours) Beatles tune, Hello, Goodbye, then right into Jet, then another “new” tune (which he explains he never played after laying down on Sgt. Pepper, and had to go back and relearn), Getting Better.

Instead of a strong co-lead vocal (supplied by Hamish Stuart last tour) McCartney uses four very strong background singers, who recreate the Beatle’s background harmonies flawlessly, especially on falsetto ‘ooo’s’ and ‘ahh’s’, some of the hardest harmonies to pull off credibly.

This outing McCartney has surrounded himself with young studio aces (Rusty Anderson on lead guitar and Brian Ray on guitar/bass), and they faithfully capture even the smallest nuances of Beatles and Wings arrangements. The only holdover is Paul “Wix” Wickens, probably the essential element in the huge, full and true-to-the-studio-versions of some very complicated arrangements.

He effortlessly (and unobtrusively) holds down the organ, strings, horns, synthesizer and piano parts while singing back-up.

The most notable difference in the rhythm section is new drummer Abe Laborial Jr. In contrast to Chris Whitten’s workmanlike and competent recreations of classic Ringo beats, Laborial plays a more spirited and tom-tom heavy style, updating the sound. Some numbers that were a bit flat last tour (Coming Up especially) really rocked this go-round.

Paul lets each member in turn say a few words to the audience while he ascends the piano riser, and smoothly trades guitar for bass a dozen or more times. The entire show is without a hitch, through several dozen instrumentation and line-up changes. There isn’t a lull anywhere in the set.

McCartney speaks to the audience frequently, telling stories about the songs, talking about the tour, but even bits he must have told a dozen times at least seem spontaneous and unrehearsed. The flow of the concert is remarkably smooth and well paced.

After a half-set of rockers, the band retires and McCartney plays a set of solo acoustic guitar numbers. His voice does show a bit of wear, and his range is not what it once was, but he doesn’t bury it in effects in an effort to disguise it.

He plays some of his most personal tunes with just his acoustic and a clean vocal sound, and still sounds like the world-class vocalist who wrote those songs 30-some years ago.

There is more emotion in his voice now, and he has gained in texture and warmth what he may have lost in the higher registers. He rarely goes for the low octave or harmony to fudge the original melody on anything, and still can hit 90% of the stuff he always has.

In fact, taking into account he is singing night after night, he sounded less rough and strained than many younger vocalists during a tour.

He has his tribute numbers, but doesn’t milk them. Here Today, his song for Lennon, was a bit rough, as if he hadn’t played it as much as some of the more fluent numbers, like Blackbird and Mother Nature’s Son.

On the latter and several others, Wix backs Paul’s acoustic with a gentle accordian wash. As the acoustic set reaches the end, each arrangement builds, adding one after another musician, until Here, There, and Everywhere, with accordian, snare with brushes, a second acoustic guitar, and all four on gentle backing vocals, the high point of the ‘unplugged’ portion of the night. Not something you see most rock bands pulling off.

McCartney also intersperses a few solo keyboard numbers like You Never Give Me Your Money and Fool On The Hill, until he reverts back to the full band. About that time you notice, he’s been onstage for over two hours without a real break.

No long guitar or drum or keyboard expositions to let him have a breather. Just song after song, a little unforced light banter in between, never once leaving the stage. And what songs they are.

In Wix’ short speech to the audience, he mentions that most bands build their set around their hit song, or two or three. With Paul, they do three smash number one hits, then follow it with another hit, then three more, and etc. Most concerts have a “moment”.

This one had dozens of them. After the acoustic set, Can’t Buy Me Love with a montage of Beatles’ mania footage. A tribute to George, Something played on ukelele (George was an enthusiast of the uke and George Formsby, Paul informs us, in a great story about Harrison, without pathos or melodrama). The powerful lead vocals, string backing and backing vocals on Eleanor Rigby.

The lighters during Let It Be. An emotional rendition of My Love, dedicated to Linda. Just great song after great song, performed flawlessly, and the feeling you are witnessing history as the guy who wrote them played some of them for perhaps the first and last tour (you never know).

This tour is less of an extravaganza than the stadium tours of the 90’s. The stage is more contained and the effects and lighting more subtle. The songs are shorter and more varied, with less of the heavier numbers. No Sgt. Pepper or Abbey Road medleys this time. Less rock songs and more solo stuff. Less new stuff as well.

Yes, it’s required he has to do some new stuff, to show he’s still out there making music, and not just a nostalgia act. What is a bit revealing is he didn’t do any of the “new” stuff from the last couple tours.

McCartney is still putting out albums and still producing quality music, but it just doesn’t have the magic of the older stuff. The numbers from “Driving” seemed like throw-aways, and if there is a next tour they seem unlikely to make the cut, any more than the “Flaming Pie” or “Flowers in the Dust” numbers from previous tours did.

Complimenting the virtuosity of the musicians, the visuals were state of the art, understated at times, breathtaking at others, but always perfectly calibrated. Obviously, an enormous amount of pre-production went into the marriage of the music to synched lighting and the integrated video screens.

One large screen and 36 8×6 screens on a grid behind and suspended over the musicians provided an ambiance for every song, each varied, differently textured and inventive. The screens worked together for on large, moving image or many small ones, swirls of color, video clips, live action spotlighting one or several musicians.

The largest screen usually featured Paul, so that every expression was visible even to the cheap seats.

In fact, it seemed like the best position was halfway back the arena, where the entire effect of the lights and vid screens could be seen to best effect. The floor seats ($150 each) seemed like the worst in the house, on an untiered floor with the everyone standing to try and see past the next row in front, and several feet below the level of the stage.

The sub-theme of the concert is Paul’s participation in the tributes to the heroes of the WTC, and for Freedom, the song he wrote for that concert, miniature American flags are handed out and a tapestry of the Statue of Liberty was unfurled.

It was all a bit jingoistic and struck the only false note in the concert. Perhaps closer to the event that stuff played well, but I don’t know if the Brits get it that was are pretty much over the whole thing, as far as celebrating it.

The war kind of got it out of our system and most Americans are bored of the entire thing and ready to move on. The crowd was politely enthusiatic, but their heart wasn’t really in it. They were waiting for more Beatles songs.

The finale, even though predictable, was still exhilerating. If there is another band or performer extant, who 40 years after their initial hit, still tours the “A” venues, with 16,000 people singing the words to almost every song, each one a classic, I don’t know who they are.

Pity the generations who don’t get it, because there cannot be an experience like the entire crowd singing the long ending of Hey Jude. The standing ovation lasted ten minutes solid.

He returned for a couple encores of course, but that ovation is the real end of the concert. The rest is just a long and winding road down, as you absorb the experience.

Its very gratifying that a legend like McCartney would have the musicians, stage management, production values and graciousness and class as a person to back up such amazing music. Its the gold standard, the most professional and respected act rock music has to offer.

After seeing the ‘Stones, Bowie, and other faded idols stumbling through lackluster concerts with great stretches of dead time, you can really appreciate what McCartney has pulled off, as he does every concert since he began performing the Beatles’ studio stuff in the early 90’s.

Instead of squandering his talents like an undisciplined Elvis, McCartney has made the most of the years since his early success and kept on at that level, a remarkable achievement.