Tales from the Crypt and the EC comics horror trilogy

WE ARE BAAACK!! Alison Angel

Hillary: We win by threatening to lose

NASA: "Since the dawn of time, Man has dreamed of blowing up the moon"

Myths of Beauchamp live on.

Lace up your cleats and join our namesakes and friends, docweaselband

Saturday, August 23rd at Tampa Stadium Gate C. Say “Hi” to the guys and mention our blog and they will give you… something.

Just for the record, none of the members of dwb have anything to do with the blog and in no way condone or approve of our disgusting and depraved decadence.

Every Tampa Bay Bucs’ home game Official Gameday band docweaselband our friends and namesake of the blog, will be playing at Gate C, Raymond James Stadium – or just Tampa Stadium, as most locals call it.

The local sport-radio morons on the Bucs’ payroll try to push “the RayJay”, but I’ve never heard a single person call the stadium “the RayJay” and I’d probably cockpunch anyone who did.

Stadium naming rights suck balls, btw. The local hockey arena, located in downtown Tampa, was called the Ice Palace, a perfectly serviceable and catchy name. But they got greedy, and sold the rights to the fucking St. Petersburg Times, who scarfed them up to fuck with the Tampa Tribune.

The Times, a worthless liberal rag, constantly tries to sell its piece of shit newspaper in Tampa, and I guess this was 33 million dollar for 12 years investment. I’m sure they sold enough subscriptions to make up for it though! Since their total subscription is less than 1/3 of a million subscribers, and their ad revenue goes down yearly, this was probably just a poke in the eye of the Tribune more than a solid business decision. Think of it as the last dying screech of a moribund medium. 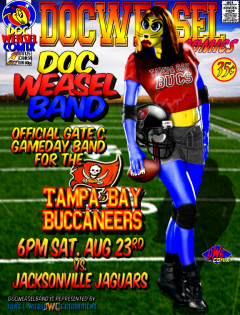 So some group of blood sucking corporate lawyers bought the naming rights to Tampa Stadium, in a move that is totally a vanity purchase. Nobody is more despised than lawyers, and I don’t think I’ve ever heard anyone refer to the stadium by its purchased name, in fact I’d be willing to bet a majority of Tampans (that’s with an “a”, asshole) couldn’t tell you the naming rights version.

Anyway, back to our subject, if you are lucky enough to have a ticket, or buy one from a scalper when you are out there, enter by the C Gate and hang out and say hi to the docweasel boys!