Tales from the Crypt and the EC comics horror trilogy 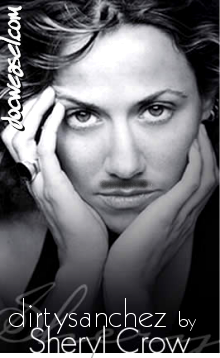 Hollywood and whatever wood the music industry is never fail to make asses of themselves when they try to instruct the rest of us on political matters.

Sheryl Crow is probably only the latest in a long string of impressionable idiots who never read a newspaper nor watched the news on teevee, but she gets into the clutches of a rabid harpie like Laurie David and all the sudden she’s an expert on everything from the Iraq War to Glowball Warmage.

Ok, so first Sheryl Crow accosts Karl Rove and makes an ass of herself, and while the spotlight is on her, she puts out a blog post advancing the bright idea that, after a long think, she’s come up with a good idea about how to cool global warmage: use one square of toilet paper instead of a lot, because it uses trees and etc.

I have spent the better part of this tour trying to come up with easy ways for us all to become a part of the solution to global warming. Although my ideas are in the earliest stages of development, they are, in my mind, worth investigating. One of my favorites is in the area of conserving trees which we heavily rely on for oxygen. I propose a limitation be put on how many sqares of toilet paper can be used in any one sitting. Now, I don’t want to rob any law-abiding American of his or her God-given rights, but I think we are an industrious enough people that we can make it work with only one square per restroom visit, except, of course, on those pesky occasions where 2 to 3 could be required.

After some sensible friends must have pointed out she is now a laughing stock (late night comedians are going to eat this up), Crow comes out with another flash: IT WAS ALL A JOKE YOU DUMB BASTARDS!. Sorry, that doesn’t read like a joke. The post goes on to list several more “modest ideas”. It doesn’t make sense that she would be joking. You’re a fucking liar, Sheryl. Now I see why Clapper dumped your ass. YOU DON’T WIPE IT!

I’ll take Crow’s word for it she’s passionate about global warmage. So, with the press paying attention, and the week she “(met) with Congressional leaders Monday to discuss global warming as the women wrap up their college tour to raise awareness of the issue,” she puts out a fucking joke blog post, in her glowball warmage blog, where she discusses “serious thoughts” about the issue.

Sheryl hun, I don’t like your music and I’m not a big fan, so we can dispense with that shit right away. I only blog this so your name and shit and toilet paper will forever be entwined in google searches, because that is what you deserve, along with all the mockery, and get used to hearing it, because its going to stick like, well, like stink on shit.

And the sad truth is, you probably don’t adhere to your own prescription: you probably use rolls of the stuff, and pull out an arm’s length to wipe your cootch when you tinkle: that’s how glowball warmage fanatics like yourself operate: do as I say, not as I do.

Everyone knows you are lying about the fact that you were “joking”. The context of your blog post was basically serious. Its makes no sense that you were joking. Why? For what purpose? And so now, when you come out with more press releases with risible tips on reducing global warmage (which nearly all such tips are risible, in the fact that they are mostly unworkable, inefficient, ineffective or actually counter-productive) we’re supposed to consider them jokes, ok, fair enough, we will. If you treat the subject unseriously, how are we supposed to care?

I am, however, gratified at the entire episode because I don’t like your politics, and I see the entire AlGore/Laurie David/PETA/Greenpeace etc. cabal as using GW as a hobbyhorse upon which to hang all of their Democrat far left control issues. Meat? Causes global warmage. Big cars? Guns? Industry? Development? NASCAR? Fur, teevee watching, playing video games, hunting, the military, abortion protesters: all cause GW and must be controlled. Now you want to control how we shit. You weren’t joking, you fucking meant it. And its symbolic of how you bastards are going to attempt to guilt and scare the public with your skewed statistics, specious arguments, pseudo-science and rigged ‘models’ and use that to control the country. Well fuck you.

Know this: you’ve materially damaged the cause you claim to espouse so earnestly, because you’ve exposed yourself as a dilettante and an unserious and unworthy advocate of a subject you would have us believe is of the utmost importance. And this reinforces the common man’s perception that celebrities are loud mouthed egomaniacs who think their uninformed opinions carry more weight because they have the ‘big megaphone’, but in fact are bad people with bad values, no morals or ethics, no shame and faulty judgement and in no position to harangue the common man on how to live -especially in your case, with your 3 tractor trailers, buses, limos, etc., on a concert tour to get people to use less energy. You’re a parody of yourself, girl.

You’re a hypocrite, you’re a liar, and you’re a bad person. And because you are stupid, ignorant and have no sound judgement or moral center you only hurt the cause you seek to foist upon us. Fools often do that.

Good work. The American Public, with infrequent lapses, usually senses the truth and makes the correct decision on the big issues. And baby, it bit you on the ass bigtime, this time.

Score one for the good guys. Sheryl Crow Toilet Paper Shit. Spider on, big Google, all over this mighty internet, and forevermore, when anyone searches Sheryl Crow, let shit and toilet paper come up first hits. And anytime anyone mentions you in print, conversation or on the air, its going to be mentioned. And your altercation with Rove, where you falsely claimed you “put your hand on his arm” and he rudely rebuffed you- in this simplistic, shallow “joke” of a post, you’ve fed everyone a real punchline: “No wonder he didn’t want to touch her!”. It will resonate. It will stick. Its got legs.

Everyone says stupid shit. Crow, unfortunately for her, had the press glare right on her dumb ass when she made this idiot remark. She more than likely makes fucktard remarks like this all the time, its just that no one is usually paying any attention other than her fawning admirers. Reading the comments on her blog, made before the shit paper hit the fan, they don’t even sense the irony or stupidity of her remarks.

However, here on planet earth, she’s not loved or likable enough to get the benefit of the doubt. Her hypocritial preaching (when she has about 100x the carbon “footprint” of the average joe) makes her unsympathetic and a target. If she were a real man, and if she were smart, she might say, “hey, I said a dumbass thing, ouch, my bad :p “. Instead, she pulls a John Kerry, saying in effect, it was all a joke and you fucks were too stupid to get it. That doesn’t engender sympathy. It will reinforce people’s belief that you are
A.) covering your own ass
2.) a liar
iii.) a stupid, controlling, hectoring, shrill harpy who thinks she’s smarter than everyone else, but is exposed as dumber, and when she’s exposed she insults the rest of us.
And quatro.) that Sheryl Crow probably smells like ass.

God, I love how fucking stupid liberals are, for all their calling Quayle and Bush and Reagan “idiots”, they never said anything as dumb as Kerry and Crow and Reid and Pelosi do daily. GWB keeps it pretty straight, rarely answers unfair attacks and its going to stand him in good stead when the reckoning comes. People remember, and people get a sense of mean-spiritedness and unfair attacks. They don’t like it. And Bush is fortunate in his enemies. And Crow is his enemy, don’t doubt it. She’s just a particularly inept one.