Nevertrumper pantytwist squad has never been more useless or powerless

Dancing With the Devil in the Light of the Moon 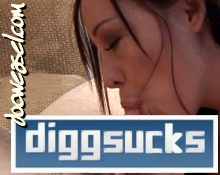 First off, there are many more than 5 Reasons Digg Sucks” but here’s one:
Second off, from a commentator at PJM about the Digg kerfuffle:

“It’s a preposterous abuse to invoke the DMCA against “distributing” a short string of numbers.”

Well, every program, image, song, heck everything there is on a computer breaks down to a (relatively) short string of numbers.

Look, either DMCA is enforcable or its not. I’ve been on both ends of it. You can’t elect not to enforce it because of mob rule. That’s the entire basis of our government, law, not mob rule.

If you don’t like it, change the law. I can hardly imagine how Digg is going to defend itself in this case, so far he seems to be arguing “well, its in the public domain already” seems weak when he helped put it there.

Lastly, as Digg seems to have aligned itself with the left, as has Google, Wikipedia and YouTube, I can only be happy to see them die by the excesses of the moonbat leftwingnuts who do things like obsessively bury any righty-blog Digg.

Like the Democrat party, all these entities are going to find that the far-left are interested in anarchy and breaking down institutions and corporations, and an institution that supports insane anarchists bent on destruction for its own sake are going to reap the whirlwind.