Girls with no Panties Picking Up Dykes at the Mall

One Soldier’s Life in Afghanistan 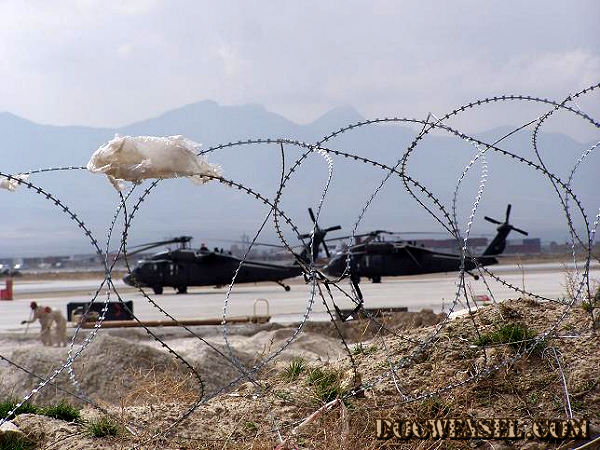 DWF (docweaselforum) member and US soldier stationed in Afghanistan, who goes by the sn Necrotaur on the forum, has posted these great pics of his experiences in Afghanistan. He’s kindly given us permission to post them on docweaselblahg. Click the small photos for large version (in a new window). Some faces and insignia have been cropped out or blurred to protect the identities of the soldiers photographed. Here are a few of the photos, with his own descriptions. The following text and photos are property of Necrotaur. I can provide contact info for Nec to anyone who requests it, contingent on his approval.

One Soldier’s Year in Afghanistan

All the pictures that are up so far are out of sequence and have no particular theme, but stretch the 14 month period of our deployment, from waiting for a ride in Kyrgyzstan, to our final airlift out of Do China. 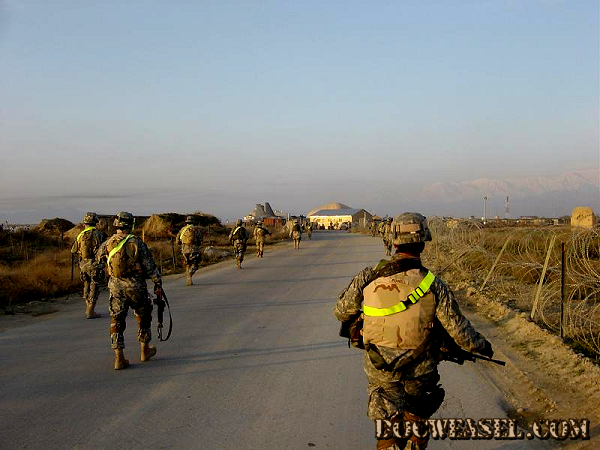 The first two pictures are of Bagram airbase in north central Afghanistan. Bagram is, as far as US bases go, relatively safe from attack. When we first arrived we were told the last ‘action’ that had happened there was a mortar that impacted the PX area but caused no injuries, almost a year prior. Sadly, after we left country, we were informed that a suicide car bomb had managed to detonate at the front gate, killing several soldiers and wounding many others. The first picture is of the flight line as seen from the area where we lived. The second is just foot march done inside Bagram for ‘unit morale’. 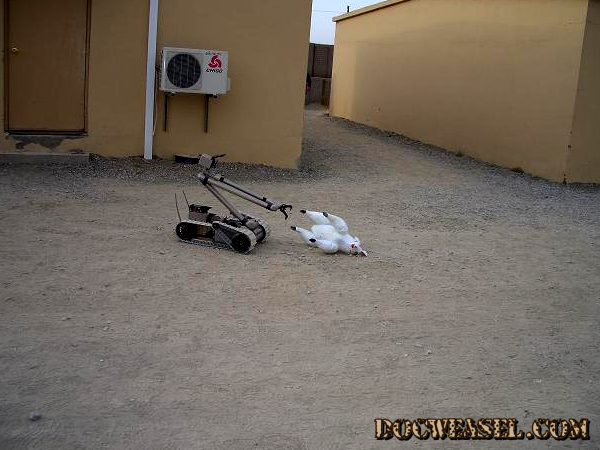 The third picture involves an inflatable sheep and a bomb disposal robot. EOD (explosive ordnance disposal) was testing their robot outside of our living quarters in Salerno, and someone got the idea to throw the sex toy in front of it to see what they would do. The robot paused for a moment, it’s camera zooming in, then picked the sheep up, whirled around a few times, and brought it back to it’s owner. 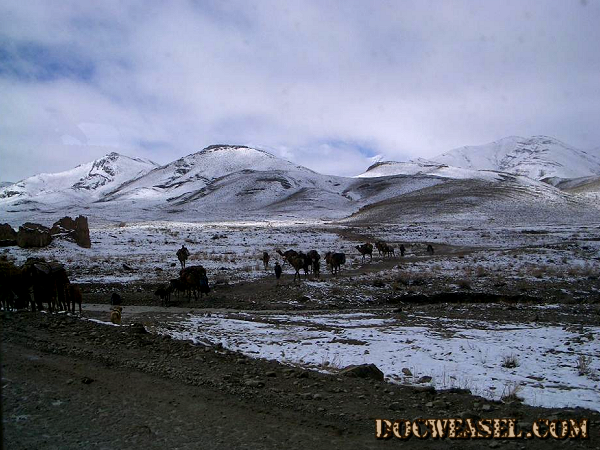 These next 2 are taken from our long journey from Bagram, through the mountain passes and eventually into Salerno. 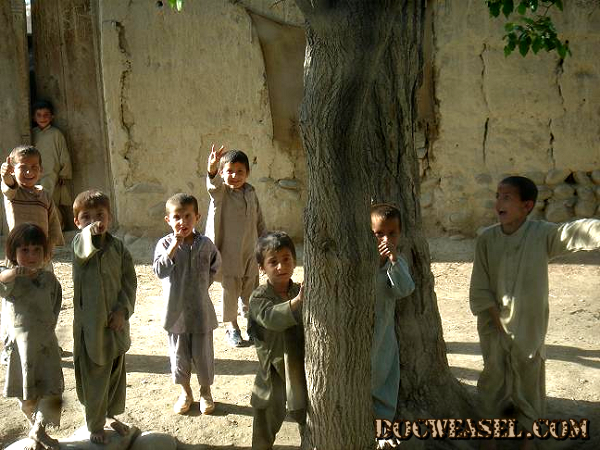 The kids are one of the worst parts of Afghanistan. Sure they look cute and innocent, but if you give them an inch they take a mile. NEVER give them candy or anything else they ask for, unless they have information or something similar in return. Unfortunately some of the units who were in the area prior to us took to handing out radios and candy from the trucks, so the children, like many wild animals, lost their fear/respect of us and saw us only as vending machines. 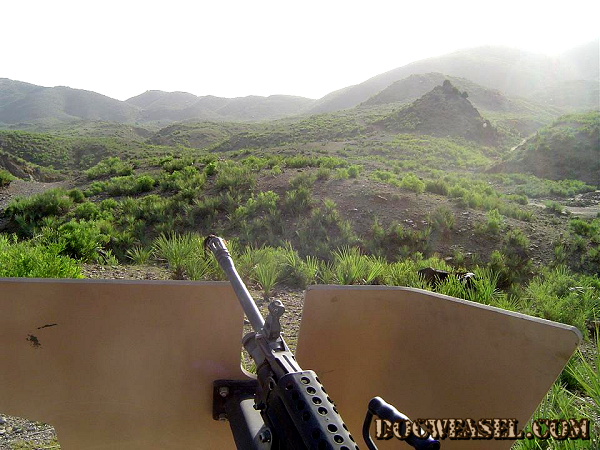 A random mission towards the end of our time in Salerno. We often went on 2-3 day long patrols, and at night we would find a place to camp out. 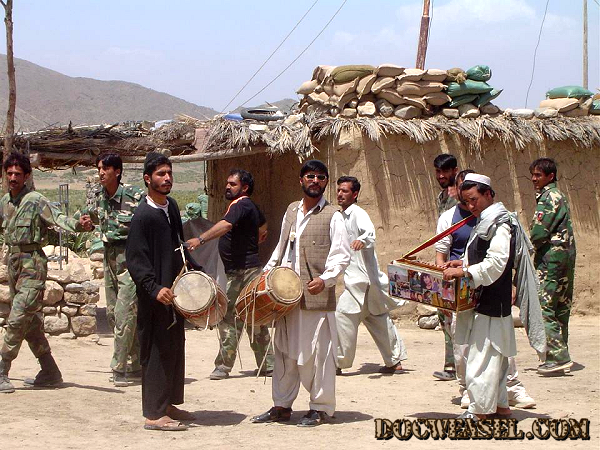 This picture comes from a ‘party’ we had with the ABP’s (afghan border police) to celebrate the end of our training together. As you can see they spared no expense. 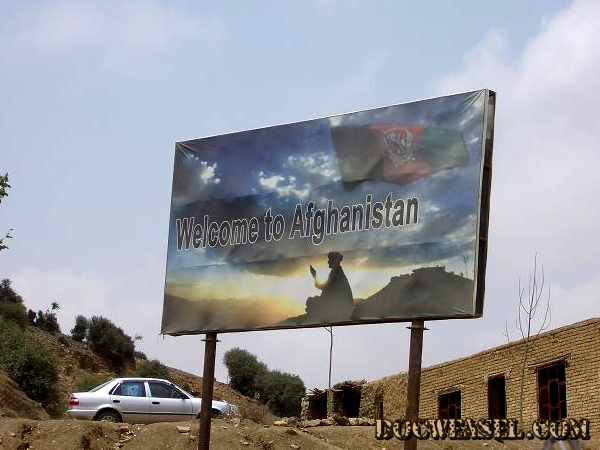 Outside the town of Khowst (which was the setting for Rambo 3, by the way). I think it may be part of a push to increase tourism? 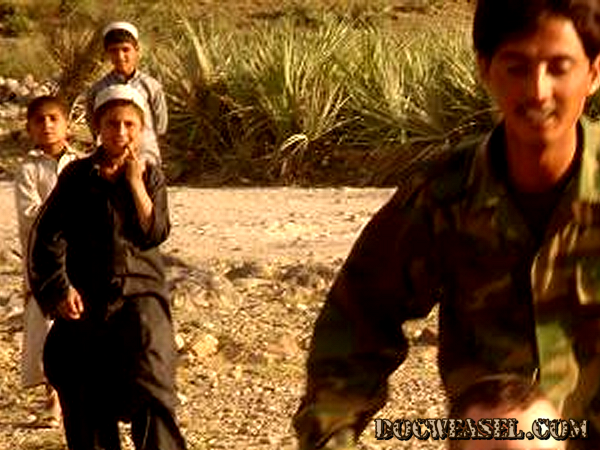 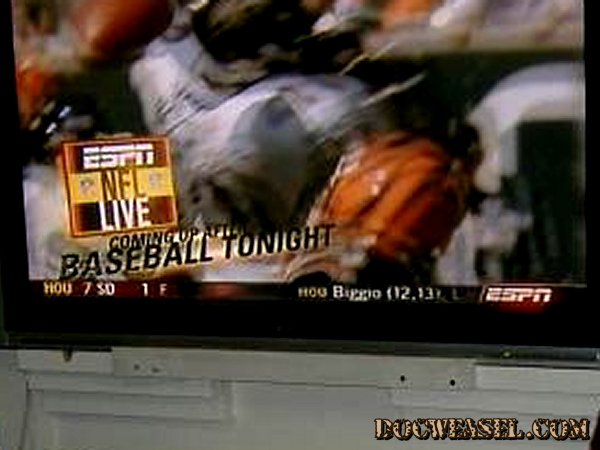 A spades tournament on a sort of ‘platoon picnic’ day. Our schedule was something like, 2-3 days out on patrol, 1 day back on the FOB (forward operating base), so we actually spent more time living outside the wire than we did back on the base. [faces cropped out- ed] 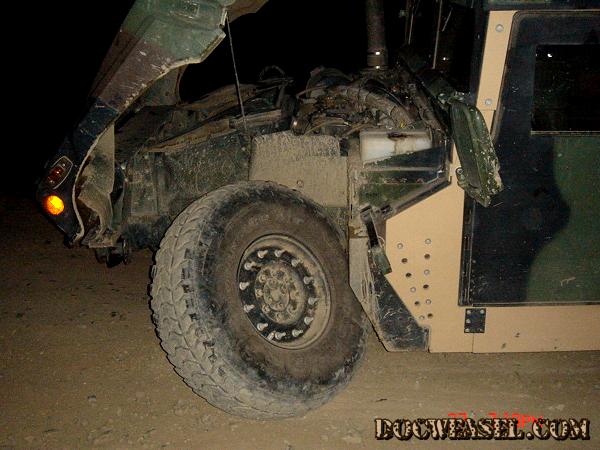 A wheel that broke off a truck. The roads (if you can call them that) are pretty bad down there. 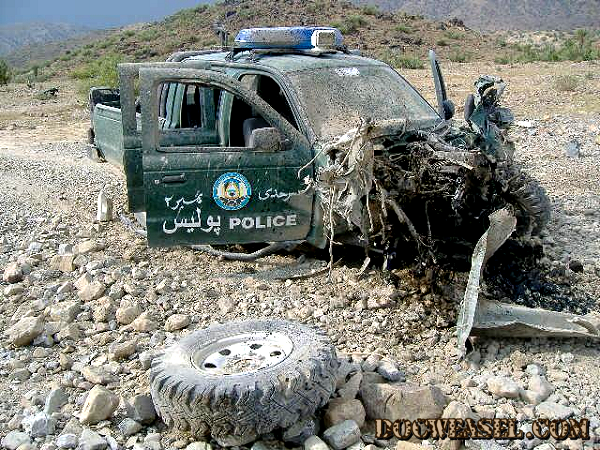 One of our ABP trucks that was blown up. There was one ABP killed in the explosion, and two more injured in the following gunfight 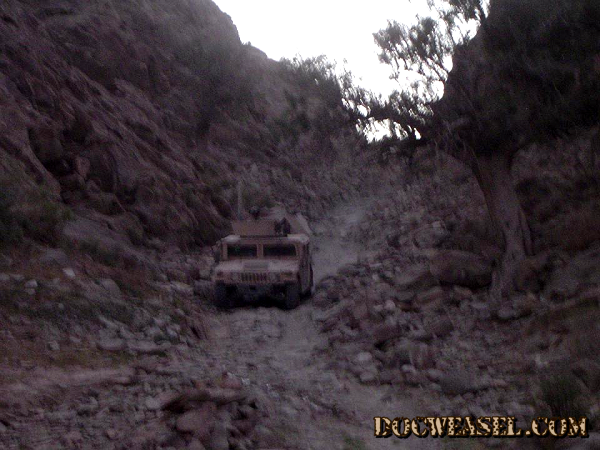 A very nasty pass that we were told to keep going through to ‘recon the area for possible insurgent activity’. This is near Do China, which is about as far from civilization and insurgency as you can get. Every time we went through this pass, more and more rocks would fall until eventually we couldn’t go through any longer. 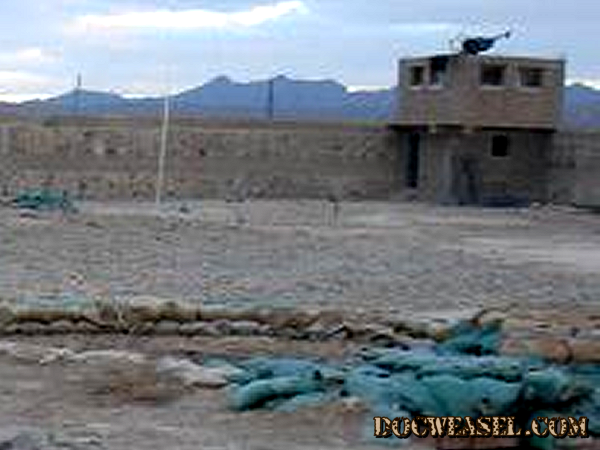 These two are from Do China itself; me after a mission. 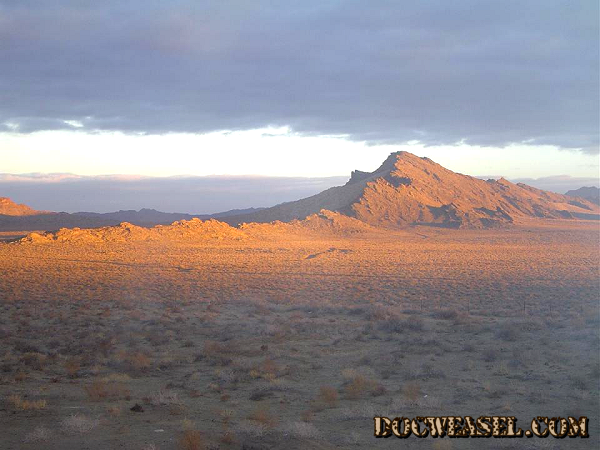 Also from Do China itself; a view from one of the towers. 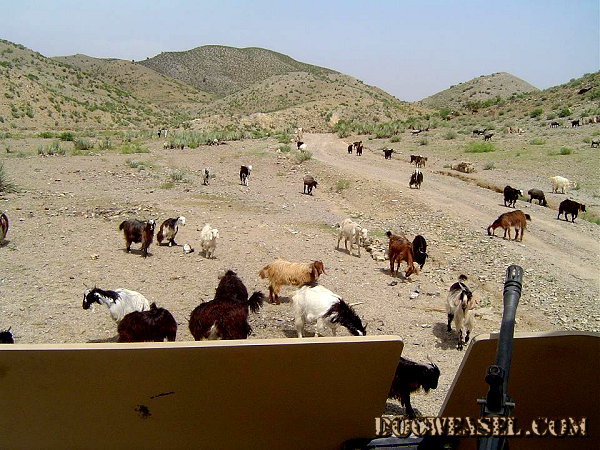 Afghanis mostly grow rice, corn and some fruit, and raise cattle and goats. A big part of their diet is bread pounded flat, milk and tea. There’s a lot of trade that goes on between Afghanistan and Pakistan/India, so you sometimes see bananas or other more commercial items like cookies or soda (which was surprisingly good). Being a poor country that relies on subsistence farming they actually do fairly well. 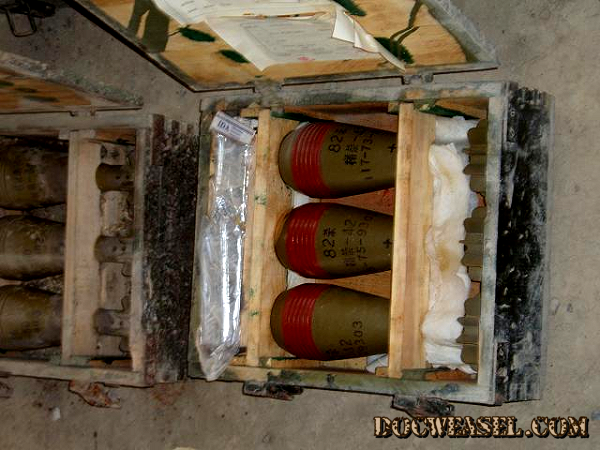 From a weapons cache somewhere. Note the Chinese writing.

We were always told to avoid local food but because of where we were the last six months (and supply personel who refused to give us enough food for our firebase) we wound up trading diesel for goats or bread. All in all local food isn’t bad, you just have to make sure it’s prepared right and the water is boiled. Nobody got sick from the food while we were there. 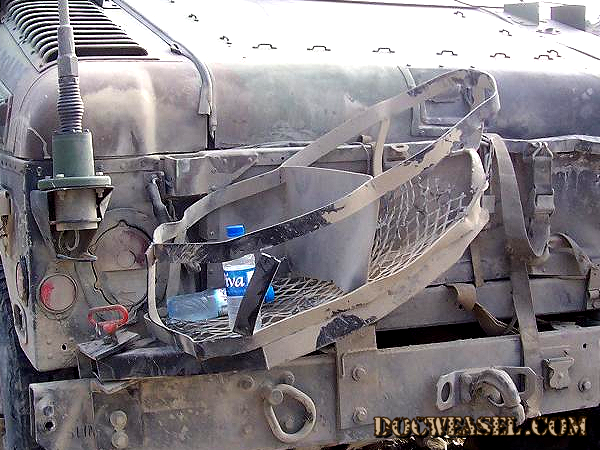 This is my truck after an IED. We were driving through a narrow ravine and it went off right after I passed over it. The EOD (explosive ordnance disposal) guys said it was 4 antitank mines strapped together. Due to the terrain it’s very difficult to see IEDs until you’re right on top of them.

There were four full fuel cans on that rack that were thrown over 200 yards, and the 50 caliber machine gun broke off it’s mount and hit the gunner in the face, knocking him out (he’s fine). The reason there’s very little damage to the truck is that 1) it went off after we passed over it, and 2) it was angled backwards, so when it went off most of the blast and shrapnel missed us.

After we secured the scene a donkey fell in the crater and couldn’t get out. 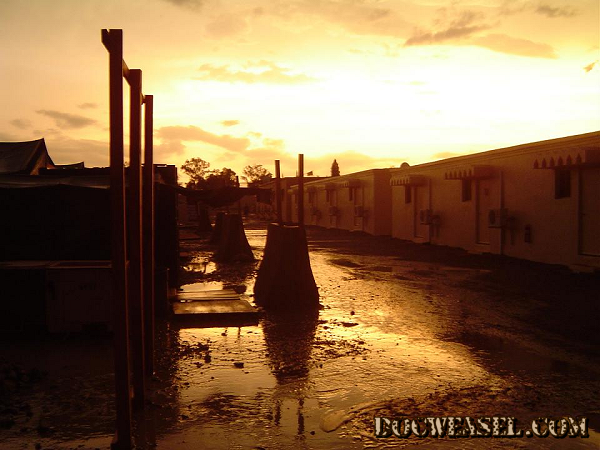 A sunset in FOB Salerno. There is actually a monsoon season in Afghanistan, where the storms from the southeast sweep up and drench the place. 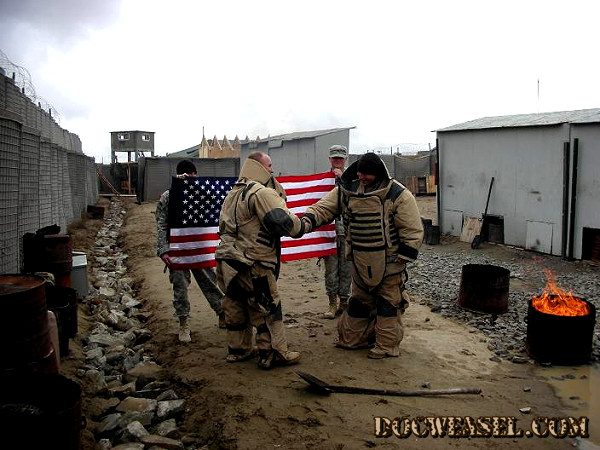 A friend of mine renlisted while we were deployed. As part of his contract he wanted our commander to put on the bomb suit that gunners wore every mission. The barrels of burning shit “just happened to be there”.

Thanks to Necrotaur for the photos and descriptions.
UPDATE: Thanks to Dan Riehl for the linkage