Only the leftists die young

Democrat Senator Cory Booker accused of gay rape: Well, he warned us he was Spartacus!

Ms. Magee on her knees

Arrogance, thy name is Obama

MTV sucks and the sun came up today

Surge is working, much to the Dems dismay

Dan Riehl, in his How Much Of Bobby Caina Calvan Is Made Up? and LGF story McClatchy Reporter Calvan Created His Own Reality make a charge much more grave than dissing an American soldier at a border crossing.

I’ve been in a quite amicable email correspondence with Mr. Calvan and have asked him to respond to these charges, if he cares to. Also, another reporter has sent me some thoughts that might explain some of the seeming contradictions in both these stories, but has asked me not to use the material. I’ve asked him to put it in a form I can use and will include it in a new post if and when he does so.

From Dan Riehl’s story regarding Calvan’s credentials and resume:

How Much Of Bobby Caina Calvan Is Made Up? 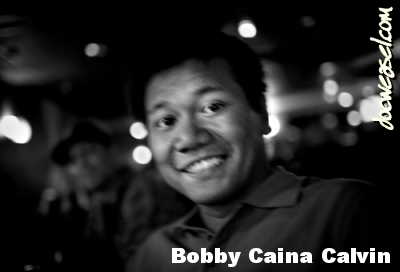 Bloggers have seized upon McClatchy’s Bobby Caina Calvan, pictured at right, for his rudeness to an American soldier charged with protecting the Green Zone in Iraq. Now Charles has turned up what might be termed a little creative reporting from Calvan dealing with an attack in Sadr City. According to this item on another blog posted Oct. 11, Calvan couldn’t have been in Iraq more than a few days when he filed that item.

In four minutes, Bobby starts his journey. His journey to Iraq. My friend and coworker will be serving a two-month stint as a reporter for McClatchy-Tribune Information Services.

At this point, I’d just like to know if he went to NYU or Berkeley as he appears to have claimed to have done “legal studies” at both without listing any degree.

So, I looked a little deeper. It may or may not speak well for what defines an A-list journalist these days. For a web savvy guy, he doesn’t have much of a presence, unless emailing a Prius newsgroup for some quotes amounts to much, though his on line presence is growing thanks to the blogs.

Did he attend NYU as is claimed in this bio via the Boston Globe? Or was it Berkeley as he seems to claim on his on line resume? What I find most interesting is how he turned up in a number of PBS instructional videos – see here – but his resume shows very little to suggest he’s capable of holding a job as a serious journalist at any one outlet for even a year.

His three years with The Globe appear to amount to little more than doing the occasional environmentalist item from Northern California as a free lancer and we already know his being “adroit” at using the Internet for journalism hasn’t worked out so well. Maybe he should go back to managing the website for his parents dental practice and leave the reporting from Iraq to some serious, seasoned journalists. It’s a thought, anyway.

And Little Green Footballs is charging he may have falsified or distorted stories:

LGF reader “Last Mohican” commented on a post by Calvan, on a story he filed about a US strike on Sadr City that purportedly killed children:

So much great stuff in this guy’s blog! Here’s more, about a U.S.-led raid on Sadr City, targeting a Shiite insurgent leader who was hiding there. The Army said that the only casualties were insurgents, but Iraqi police said that a woman and three children had been killed! Our brave, impartial hero set out to tell the story:

…the story that was already being composed in my mind. I was after vivid descriptions that could, if warranted, paint a scene of chaos, anger and grief.

From the nerve center of his operation, presumably some hotel in the Green Zone, our hero expertly attempted to send a woman into the scene of the carnage to gather some really troubling details:

Jenan, a Shiite member of our staff of local reporters, went to work to track down witnesses. She spoke to at least two by telephone. But I pressured her for more. I wanted an interview with a doctor.

I wanted quotes from some of the injured, maybe even words that captured the anger and grief of the family of the dead.

Ultimately, the decision was made that it was too dangerous for Jenan to go into Sadr City. So, while our hero did some other important stuff, his Shiite colleague called a few Shiites she knew, and got some good stories about all the Shiite civilians that got killed while our troops were supposedly hunting a Shiite insurgent leader. As Calvan tells it:

And “write around what we could not get” was exactly what he did, by golly! Our hero once again stepped up to the plate and did the dangerous, difficult work that a lesser man would not dare to undertake: he spoke to Jenan on the phone, and then wrote a story about what she said, filling in the missing pieces himself, as necessary!

You know, when it comes to the crucially important task of putting our bumbling, incompetent, civilian-killing troops in their place, this brilliant, courageous man will do whatever it takes to get it done. I couldn’t possibly (seriously, I COULDN’T POSSIBLY) say it better than he said it himself:

Ultimately, it is up to us to decide how far we will take our quest for the truth. In has nothing to do with courage or fear. It’s about a mission.

And now after reading that description of Calvan’s blog post, here’s the article he wrote for McClatchy news service, based entirely on second- and third-hand information he got through the courageous act of picking up a telephone: U.S. says Sadr City raids kill 49 militants; Iraq says civilians died.

The gun battles erupted after armored military vehicles, backed by helicopter gunners, arrived on the fringes of Sadr City to conduct a door-to-door sweep for a rogue militia cell leader the United States accuses of masterminding the kidnapping of coalition soldiers and other foreign nationals in May and last November.

The target of the manhunt was neither captured nor killed, the military said.

“It’s the biggest raid in two months,” said Karem Hellal, 45, who was out on the street when the soldiers descended on his neighborhood.

Sirens wailed as ambulances carried the injured to the hospital. Doctors treated casualties, including children, at Imam Ali hospital, the biggest in Sadr City.