Edwards is scum. Someone should say it.

Notes on Improving Evolution, the board game

Bobby Calvan’s blog comes back from the dead 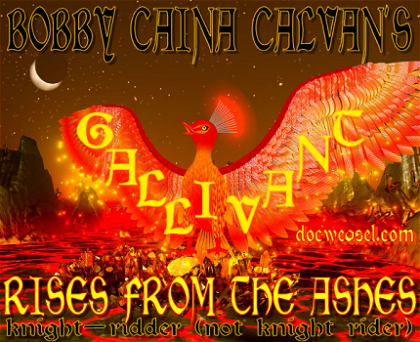 Gallivant, Bobby Calvan’s blog that made such a noise on the ‘sphere yesterday is back up, and he’s allowing (moderated) comments in his new post.

The response to one of my earlier posts, headlined “Simply Simpatico,” caught me off guard — further evidence of my naivete when it comes to the blogging world. My modest blog about my experiences in Iraq — that I assumed would only garner interest among family and friends — caused quite a stir.

By the way, this blog was never sanctioned by my employers, The Sacramento Bee and the McClatchy Co. It was meant to be a private blog that chronicled my experiences in Iraq and a way for me to express my personal thoughts. Again, it was meant for friends and family — to save me the trouble of responding to every e-mail I would get. I should have made this blog private — and judging from the response I’ve gotten, I should consider such a move.

Yes, I’m obviously new to blogging. Somtimes I share too much. The blogosphere has reacted and pointed out my folly. Yes, I can be pushy. Arrogant, too. I can also be wrong.

Consider this my apology.

Overwhelmed by the e-mails, many of them vitriolic, I initially edited the post, then blocked further comments. Finally, I took down the site. Unfortunately, my actions were yet another faux pas, I was told; I should have left up the post and created a new one to share my reactions and issue an apology.

Yes, I am getting well-deserved criticism. But surprsingly, not all of the subsequent e-mails I got were vitriolic. Some were thoughtful. A few gave good advice.

There are many fine men and women serving in Iraq. There is no doubt about that. I’ve spoken to quite a few of them in my brief time in Baghdad. They have done their best to help many of us do our jobs. It is an environment that is extremely stressful and challenging.

The soldier at the checkpoint to whom I referred to in my earlier blog was doing his job. That much I do know. I was trying to do mine. In the end, he let me and my security guy in — after rightly taking the necessary steps to verify our identities.

Perhaps any future incarnation of this blog should be private, too.

Credit where its due, he’s not cutting and running, as he easily could, he’s come back to explain, apologize and take his licks. Ok, that chapter is done, its rude and useless to keep bashing the guy once he’s apologized.

He is in Iraq, and is in a position to inform us all about something of which we are very interested. I’m more inclined to read what he has to say from here on out.

Good luck, Mr. Calvan, and stay safe over there. He is in a very dangerous area doing a job, and we shouldn’t take that lightly, either.

I think the guy is sincerely contrite and has apologized, and that we should move on and judge him for what he writes from here on out.

Update: May not mean anything, but Calvan’s blog lacks a page 1 and 2 for now, anyway.

Sorry seems to be the hardest word … especially for Bobby Caina Calvan. I read his apology, which I believe doesn’t even include the word sorry, and was left with the impression he was sorry … for cluing everyone in on what an ass he is. ymmv

But he did bring the blog back up … all of it? Hard to know

We differ on our opinions of whether Mr. Calvan is truly contrite about dissing a U.S. serviceman, but Re: the missing posts:
Since they are sequential and 1,2,3, I’d think its more likely they were discarded tests posts. If p=11 and p=13 were there and not p=12, I’d sure wonder what was missing, but this doesn’t seem significant. Dan is the internet masteh though!

More from Kevin at McClatchy Watch
and
Verifrank:UPDATE: Bobby Calvin