Florida to NH & Iowa: Fuck you

Hillary: We win by threatening to lose

docweaselband live Old Man and Me

Clinton’s strategy on the Wright wrongs: Never get in the way of your opponent destroying himself 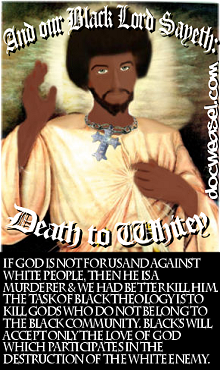 This is really all you need to know about the Church in which Obama sits every Sunday for the last 20 years, in which he was married, which baptized his kids, and through which he claims informs his campaign and his life spiritually.

In a set of “talking points” on the church’s Web site, Wright proclaims himself an exponent of “black liberation theology.” He cites James Cone, a distinguished professor at New York’s Union Theological Seminary, whom he credits for having “systematized” this strain of Christianity.

Here is a quote from Cone, explaining black liberation theology:

Black theology refuses to accept a God who is not identified totally with the goals of the black community. If God is not for us and against white people, then he is a murderer, and we had better kill him. The task of black theology is to kill Gods who do not belong to the black community. . . . Black theology will accept only the love of God which participates in the destruction of the white enemy. What we need is the divine love as expressed in Black Power, which is the power of black people to destroy their oppressors here and now by any means at their disposal. Unless God is participating in this holy activity, we must reject his love.

Does Obama believe this stuff, or does he merely go to the church every weekend in a hypocritical sham of faking being a regular church goer. Does the church to which he is deeply involved, and to which he gives 10’s of thousands of dollars a year in donations, reflect his beliefs or is this merely something he does to shore up his religious credentials or his relationship to his local black community? He can’t have it both ways. Either he’s a dishonest hypocrite, or he’s a radical leftist race-hustler along the lines of Jesse Jackson.

Mike Medved puts it succintly:
Hey, Barack—it’s either one or the other: either you were lying when you talked about your deep, soul-changing involvement in Trinity United Church of Christ, or else you’re lying when you say you never had any idea (until last week) about the crazy and offensive and sickening contents of the pastor’s diatribes from the pulpit.

Joe Tobacco over at Cadillac Tight wonders why Team Hillary! has so far kept mum on the entire Jeremiah Wright fiasco:

Some Clinton supporters will no doubt see this obviously coordinated effort not to use the Jeremiah Wright sermons against Obama as a classy move. I wish I could see it that way myself.

The fact is, I think the Clinton campaign has been cast as “racist” so many times by Obama’s campaign that they are afraid to say anything about an issue with as many racial overtones as this one. They are refraining from using a perfectly good opportunity to draw a contrast between the two campaigns in terms of how they intend to approach the issue of racism in this election because they’ve been browbeaten by Obama surrogates, media mavens, and progressive bloggers since South Carolina.

There’s a serious double-standard in operation here: When Obama brings up race, we’re having a “discussion” about racism. When Clinton brings it up, she’s “racist”. I suppose the double-standard itself isn’t what Obama supporters consider worthy of discussion, however.

I think its more that injecting herself into the story would make it seem like another campaign ploy and give Obama defenders a foil to rail against instead of having to explain Wright’s insane ramblings. With Hillary quiet, it leaves Obama twisting in the wind, trying to make increasingly tortured and unlikely excuses like “I wasn’t there that day” or “crazy uncle says things with which I don’t agree, but hey, he’s a good guy” or even “its not that bad.”

My favorite is the church’s own excuse that out of 2million hours of sermons, only about 200 hours were total “Death to America” hatespeech. I wonder if this “total ratio of words spoken vs. radical racist rhetoric” would have worked for Imus. I also wonder what Wright had to say about a single humorous sentence by Imus, condemning him after 30+ years of talking about other stuff.

There’s a simple reason why Clinton is staying out of this: The old adage is: “when your opponent is destroying himself, get out of the way and let him do it”. Or something like that.

This is potentially campaign destroying for Obama. How he could not have foreseen this speaks to just how inexperienced and naive about politics he really is.

I’m a little disappointed because I am one of the few who thought, and still thinks, that he is the weaker candidate.

And its proven by this very episode. Clinton’s strategy was to hang around and wait until the harsh glare of the media, which would naturally focus on the frontrunner, caused him to predictably self-destruct, because she knew he was not ready for prime time

Clinton is a brawler, and could very well well. I’m relying on the common sense of the American public to reject her.

Obama would have been a McGovern-like figure, being completely crushed in the general. The only down side to this is that he has destroyed himself and alienated and embarrassed those who supported him, and Hillary is in no way to blame, so there will be little bitterness against her, so his supporters may largely be fungible to her campaign, which is exactly what I’d hoped for to really damage her in the general.

Now, he would have to consider it a favor to get the VP nod, which would assuage his erstwhile supporters and make her seem magnanimous.

It was fun while it lasted, but now that he is fatally damaged, it seems like a no-brainer that someone as inexperienced and untalented and unaccomplished as Barry would self-destruct.