British softboys (and gays in general) take over the culture

Death of a Messiah: Sad Ballad of the End of Barry the Organizer

Fuck your reparations. If anything, you owe America. 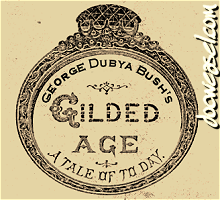 Obama’s lasted spitball against the Bush/Cheney regime: Bush has created another Gilded Age.

“”It was an era known as the gilded age,” said the Illinois senator. “Theodore Roosevelt decided not to play along.” He said the policies of the Bush administration have taken the country in that same direction. “We can’t settle for a second gilded age,” Obama said.

In American history, the “Gilded Age” refers to the post-Civil War and post-Reconstruction era, from the 1870s to the 1890s, which saw unprecedented economic, industrial, and population expansion. The era overlaps with Reconstruction (which ended in 1877) and includes the Panic of 1873. The era was characterized by an unusually rapid growth of railroads, small factories, banks, stores, mines and other enterprises, together with dramatic expansion into highly fertile western farmlands. There was a great increase in ethnic diversity from immigrants drawn by the promotions of steamship and railroad companies which emphasized the availability of jobs and farmland.

So this is a bad thing?