docweaselband live I Saw Her Standing There

Getting ready for Saturday night?

Docweasel Christmas #5 Gift of the Magi

John Kerry’s Rapid Response Team has the goods SBVT, vows to be ready for 2012 elections. 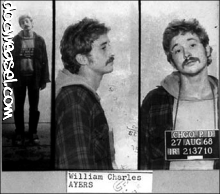 Did homegrown lefty terrorist and Obama bff Bill Ayers originate the liberal “tilted head” trope? Bill Ayers, the unrepentant terrorist, and his accomplice, who was accessory to the murder of three innocent people during a robbery to finance their terrorist activities.

He’s tilting with concern for the working class cops who are just tools of the establishment, arresting and booking Ayres just for exercising his right to expression (by blowing shit up).

”Kill all the rich people. Break up their cars and apartments. Bring the revolution home, kill your parents, that’s where it’s really at,”

Kill your parents, kids! This guy is one sweet piece of work. Here is yet another of the kind of people Obama associates with and is friendly toward, and who started his political career by hosting a party kicking off his first Congressional run.
Another, just in case the “well that was a long time ago” crowd wants to chime in, here’s John McCain with more:

Because if you’re going to associate and have as a friend and serve on a board and have a guy kick off your campaign that says he’s unrepentant, that he wished bombed more — and then, the worst thing of all, that, I think, really indicates Senator Obama’s attitude, is he had the incredible statement that he compared Mr. Ayers, an unrepentant terrorist, with Senator Tom Coburn, Senator Coburn, a physician who goes to Oklahoma on the weekends and brings babies into life — comparing those two — I mean, that’s not –that’s an attitude, frankly, that certainly isn’t in keeping with the overall attitude… And it’s very insulting to a great man, a great doctor, a great humanitarian, to compare to him with a guy who says, after 2001, I wish we had bombed more. . . But how can you countenance someone who was engaged in bombings which could have or did kill innocent people…”

Here’s the result of their “protest”:

Here’s the gist of the nut of the story from Powerline:

The Friends of Barack Obama, Part 1
When Illinois State Senator Alice Palmer decided to retire in 1995, she hand-picked local left-winger Barack Obama as her successor. In order to introduce Obama to influential liberals in the district, she held a function at the home of Bill Ayers and Bernadine Dohrn. This was, really, the beginning of Obama’s political career, and it linked him forever with Ayers and Dohrn, with whom, as his campaign has acknowledged, he continues to have a friendly relationship.

Ayers and Dohrn were famous radicals, and fugitives from the law, in the late 1960s and early 1970s. Dohrn, actually, was the more famous of the two; she was the head, as I recall, of Students for a Democratic Society or one of its factions. Dohrn was crazy. She is the only public figure, to my knowledge, to approve publicly and enthusiastically of the Charles Manson murders.

Ayers was a would-be murderer of soldiers and policemen, but he wasn’t a very good terrorist. He had the ill fortune to choose September 11, 2001, as the day on which to publish an op-ed in the New York Times, in which he said that he didn’t regret his attempted murders and only wished that he had planted more bombs.

In last week’s Pennsylvania debate, Barack Obama was finally asked about his friendship with, and the political support he has accepted from, Ayers and Dohrn. Obama replied that Ayers had done reprehensible things forty years ago, when Obama was eight years old, and scoffed at the idea that Ayers’s ancient history could be relevant. That was disingenuous, of course, given Ayers’s 2001 regrets.

It turns out that we don’t have to go back as far as 2001 to find that Obama’s friends are as unrepentant as ever. Just last year, Ayers and Dohrn attended a reunion–no kidding–of what must have been the tiny remnant of SDS members who still haven’t figured out that they were wrong about everything. Listen to what Bill Ayers, who hosted Barack Obama’s first fundraiser, has to say about the United States. Not when Obama was eight years old, but in 2007:

At the same event, Obama’s friend and supporter Bernadine Dohrn described the United States as “the monster.” Obama was 47 years old at the time: