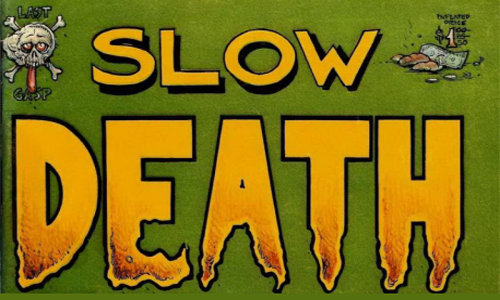 Last Gasp (1970-77)
On April 15, 1970 Ron Turner and Last Gasp published the company’s first comic book; the ironically titled Slow Death. Turner and the Last Gasp website still hold to the claim that the publishing date was the first Earth Day, but every documentation I’ve seen states that April 22, 1970 was the first official Earth Day (which kind of set the tone of Slow Death’s grasp of actual facts, since it presented itself as more than a comic book). In any case, Slow Death would turn out to be the most successful series Last Gasp published in the ’70s, running 11 issues; the first 10 were published from 1970-79 and the 11th was published 12+ years later in 1992.

Ron Turner attended San Francisco State University in the late ’60s and was a typical antiestablishment college student, smoking plenty of pot and protesting the war in Vietnam. He was also interested in the growing environmental movement and moved to Berkeley in 1969, where he got involved with an ecology center. In a fund-raising effort for the center, Turner borrowed $2,500 and began developing Slow Death Funnies #01 as a benefit comic book.

A few months later the comic book was finished, but when Turner hauled the 20,000 copies he had printed down to the ecology center, the new staff at the center refused to take on the inventory that the old staff had agreed to. Turner recalls, “They (the new staff) looked at me and said, ‘What’s this for?’ When I explained to them, they said ‘Well, we’ll take ten copies.’ I said, ‘Well that’s nice, but I’ve got twenty thousand!'”

Stuck with all those comic books, Turner began a nomadic journey across the country to sell (and give away) his inventory. Fortunately, it was well received by the youth culture wherever he went and Turner returned to Berkeley and began running Last Gasp out of his garage. By the summer of 1970 he had published his second comic book (the first all-women comic book It Ain’t Me Babe) and had a third in the works (Skull Comics #2). By the end of the year he was printing 20,000 copies of Slow Death #2.

The futuristic science-fiction stories continued to appear in subsequent issues, but they were slowly replaced by all manner of comics, from educational stories about atomic power and cancer to comics about animal rights and war. The underlying theme was always about what the human race was doing to damage the native planet and fuck up our minds and bodies, but comics fans tuned in for the gore, violence, well drawn nudes and typical comic adventure stories which these eco-fables really were. The series pretensions are mostly forgotten today and the comic is just another example of the art and stories typical of underground comics in the ’70s and beyond, and really, that’s as it should be. I can think of no group less qualified to be lecturing the rest of us than pothead comic book artists.