Lipstick on a Pig, Political Etiquette of a Boor

Atrios is typical of leftists blogs: a black hole, sucking up light and truth with his asstastic fuckheadedness 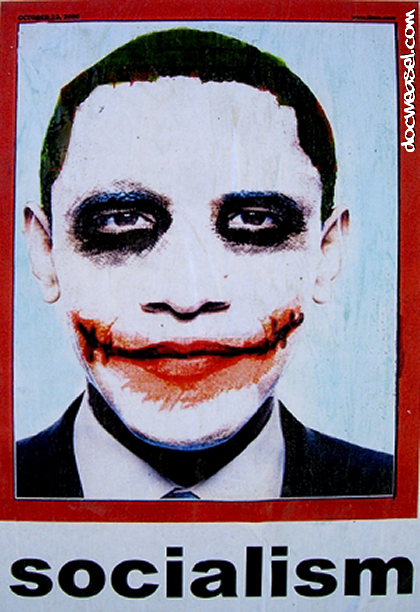 Sometimes an image is so resonant, so perfectly calibrated and executed that it becomes immediately “viral”. This is one. And being so, it’s got the left scared shitless. So, being effective, it’s of course being labeled racist, as any effective attack on Obama ends up being so described.

Some assholes don’t get it. Obama is the Joker. He wants to tear it all down. He wants to destroy America. He hates America, as it is currently comprised. He detests white people and their culture and their supposed hegemony over the country. He wants a repressive, controlling central authority to take over every facet of the economy and your life. He detests liberty, he wants to repeal the 2nd Amendment and he wants to socialize, if not outright communize, the country.

He is a liar, a racist, a sociopath. He despises religion and those who are religious. He despises anyone who is not in his “class”; i.e., working people like Joe the Plumber. He has the same worldview as William Ayres: tear it all down, but he’s doing so from the inside. Unless we stop him. If you can’t understand and see that, you are blind and a fool.

Some people pretend not to see it because they pump out worthless, amateurish photoshops no one gives a shit about and they are jealous, so they claim the poster doesn’t work. It does. It is the best image depicting Obama’s evilness ever. And it’s spot on target, and it’s resonating.

These are heady times for the Right and the GOP. The Right is ascendant and the Left is finding out the pitfalls of power. Every time the pendulum swings, the other other side jumps to the conclusion that it will stick on their side: never happens.

The Democrats are also in denial about the vehemence and legitimacy of the anger against Jokebama in the country. More to our favor.

We nominate the name “Jokebama” as the handy nomen for this image.

We also prefer this for pure “art”:

Sunday with Danial and Barack (or, “Somewhere in Kenya a Village is missing their Idiot”)

AOSHQ: Liberal Media Screams Hysterically About Depiction of President as The Joker

The Corner: Dept of Double Standards

Treacher: Why So Spurious?

American Power: Father was a Drinker and dope fiend

Rosita the Prole: Obama as the Death Clown

The Greenroom: An Alternate Obama Image

Slublog: Alternate Ob [see, slublog fancies himself a PS maven and can’t find anything good to say about anything clever anyone else does in a substantial sense, so he just says “nice technical work, but you’re political points suxorz next to my genius” as he posts his own, inferior copy version we call “Brokebama”- ed]

The Daley Gator: Obamacare – Why So Serious?

Sundries Shack: The Riddler Might Have Been a Better Choice rightofcourse.com: The Obama Joker picture – a teachable moment

The Anchoress: Obama As Joker

Scared Monkeys: Demonizing the President … Since When has that been an Issue? |

The Jawa ReportObama as Joker

Michelle Malkin: How quickly they forget

Around The Sphere: Which President Would Be Cesar Romero’s Joker? Nixon, Obviously

Redstate: A Little More on the Joker

Tammy Bruce: You Know B. Hussein Is In Trouble When…

A Little Off: Obama and the Joker

Rick Andrade’s Blog: Bizarre (But Weirdly True) Posters Of Obama “The Joker” Are Appearing All Over the LA Area…

Truthbucker: It’s Bad for Obama When…

American Glog: Why So Serious?

Where Liberty Dwells: Obama and Socialism: People Are Recognizing It

Quid Sit: Why so stimulus?

The Humor Institute: Wholesome Fun for the Whole Family

a slice of polis: Health Ledger is ALIVE!!!!

Beltway Snark: Why so serious?

Noble Patriot: Obama Joker Poster Popping Up All Over LA

Sharp as a Marble: Turnabout is fair play

from the foothills: Alternate Obama Poster

The Campaign Spot: The Obama-Joker Poster Is Counterproductive

Right Wing News: The Left And The Joker – Reaping What They Have Sown And Not Liking It

War on the Home Front: How quickly they forget

Vets On The Watch: Take A Gander At The Geese

Frugal Café Blog: Obama As The Joker, No Joking Matter…

Republic Wasted: Why so serious?

The Recreant Right: One of these things is not like the other

The IUSB Vision Weblog: Left has a cow over Obama as the Joker poster but where were they when it was done to Bush??

The Clampdown: Why So Serious?

Kyle Varner’s Blog: Obama as the Joker! (and his fans are mad!)

Evynn’s Weblog: Bush As The Joker

Asheville “Tea Party” Protest: We Are Now The “Anti-Reform Mob”

Tammy Bruce: You Know B. Hussein Is In Trouble When…

Big Hollywood: When is ‘Whiteface’ Okay? When the ‘New York Times’ Says So

Michelle Malkin: How quickly they forget

The Sundries Shack: The Riddler Might Have Been a Better Choice, Come to Think of It

Tim Worstall, Examiner.com: The Obama Joker poster: about time too

First Things, The Anchoress: Obama as the Joker

Alberto de la Cruz, Babalú Blog, an island on the net without a bearded dictator: Blasphemy

Legal Insurrection: Obligatorily Snarky Obama Joker Poster Post and Do Unto Obama As Obama Did Unto Bush? You Betcha

Hot Air: LA Weekly wets itself over Obama/Joker poster: “The only thing missing is a noose”

Conservative for Change: Liberals Up in Arms Over Obama Poster—But What About the Last 8 Years?

Blog de KingShamus: Hey, you know about the poster showing Obama as the Joker? It’s racist!