Bobby Calvan’s blog comes back from the dead

What if you started a war protest & no one showed?

Dem FL and MI delegates should be seated: we would no longer have to hear from Iowa and NH assholes every 4 years 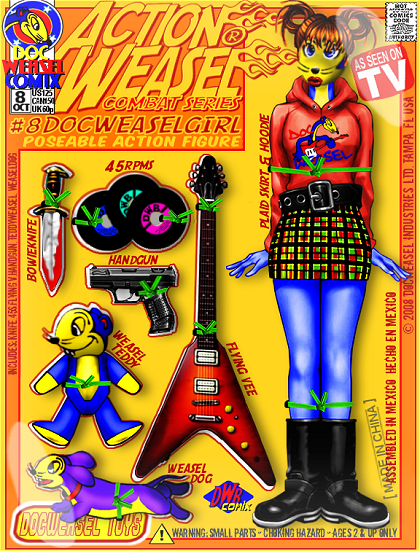 Dressed in a red-green plaid skirt, black mosh boots, big ol’ belt and a red docweasel® hoodie, this babe is more than prepared for action- unlike the old song, she’s built for comfort and speed.

dwg #8 has music on her mind right from go. She comes ready shred on her Gibson Flying Vee®, or if you’re in the mood to move to the music instead of create it, she can spin some tasty grooves with a collection of classic 45s (playable on a separately available hi-fi stereo record player, not included with the figure).

If there’s trouble, she’s also equipped to rumble with a different kind of .45 – and a razor-sharp hunting knife for going mano-a-mano or when stealth is of the essence so as not to alert sentries of the presence of intruders.

A quick slit of the throat or deep thrust to the heart and all the sudden bringing a knife to a gunfight is not such a bad proposition, at least if surprise and strength are on your side, and #8 brings plenty of both to the table when death is on the line.

The gun fires actual .045 calibre projectiles which are not dangerous to humans (do not fire toward the eyes) but which might injure small animals, and the bowie knife is razor sharp, so some care should be taken with these accessories.

#8’s not at a loss for companionship either, with her trusty weaseldog and lovable weaselteddy ready to assist #8’s mission of just hang out.

Soft and pliable, yet firm and durable – most superficial cuts and abrasions are nearly instantaneously “self-healing”.

Epiderm® skin covers Musculon® fibers, extruded and individually wrapped muscle bands that duplicate the anatomy of human musculature, and give her tendons and ligaments the resilience and power of sprung steel.

This patented skin and muscle system is laid over a sturdy titanium armature that is as fully articulate as the human skeleton. #8 includes the standard Combat Series complement of 136 ball-socket and hinge joints for realistic movement and a wide range of motion on a par with a human contortionist or tantric expert. #8 also features supple finger and hand manipulation.

Like all the Combat Series figures, this character is highly detailed and as life-like and anatomically correct as an anamorphic weaselgirl superhero can be.

Other fine craftsmanship includes the individually rooted head and body hair treatment and realistically sculpted and finely detailed face, well-muscled, yet gracefully rounded, torso and limbs and haunches. The answer to your question is, “yes, she has been working out.”

The “automaton action” features 48 nano-servos and a robust hydraulic system that allows remote radio controlled manipulation of every joint and muscle with extreme force and power, the power ratio is rather closer to the strength-speed/size ratio of a large cat, (a lion’s strength or a cheetah’s speed and agility), rather than an athletic human girl of 19-20.

Continuing the analogy, internal gyros give the figure a cat-like balance and keep her upright and well-oriented, even in the most harrowing conditions. Whether delivering a round-house kick or climbing a sheer cliff face, #8 is totally under your guidance and has been engineered to move with the realism of 105 pound, 20 year old human girl, if she had the power, speed and agility of a 600 pound jungle cat.

Of course, due to the Combat Series micro-nucleic power system, endurance is not an issue. As is typical of all models in the Combat Series, #8 need never be refueled and requires no maintenance as long as the core housing is not compromised, with a half-life of 4000 years.

The 4 360° joysticks and the 8 submenu mini-computer readout screen on the Combat Series Controller® allow a measure of command that is virtually godlike, in that it allows the operator to be not only both omnipotent and omnipresent, but omniscient as well.

#8 moves as you would move your own body, if you had the same ratio of speed/strength and sense of balance as a full-grown Bengal Tiger. #8’s leaping and climbing ability are also roughly analogous to an adult jaguar or leopard, allowing jumps and falls that would be somewhat unrealistic for a human character, but are quite within the realm of verisimilitude for a superhero character without the ridiculous disregard for the laws of physics you see in comic book movies like Spiderman or Ironman.

You can also utilize the auto-pilot’s pre-programmed moves and gaits, from a casual lope to a full-out dash (top speed approx. 70mph/112kph) , and a variety of automatic attack and defense AI strategies that adapt to the situation and “learn” and evolve as #8 experiences battle in real-time. You can also program in your own gaits, behaviors and fighting moves with the Regime Construct Program for PC (the platform does not support the old, obsolete Mac OSX of the now-defunct Apple Corp., but can be used with vintage Macs using various PC environment emulators), which is ported via wireless to your hand-held controller (you will, of course, lose a lot of performance, as Macs are notoriously slow and clunky compared to the newest PCs running Windows28). Other users can post their own custom regimes on the DWF Combat Forum, which you can then download and install on your own action figure.

#8’s internal “first person” binocular vision head-cams let you see what she sees. The head-cams have a peripheral vision sense nearly 220% wider than a human eye, giving your a bug’s eye view of your surroundings, letting you react to obstacles or enemies that would be invisible to an action figure with non-superhero abilities.

The #8 model is amphibious and fully submersible. The latex skin keeps her electronics and stainless steel skeleton impervious to water, even at extreme pressures, up to 300 bar counter-pressure at a depth of 3000 meters. All ocular features include light amplitude and infra-red mode for night-vision and deep-ocean vision in lighting conditions approximating .001 candelas @ .006 lumens.

The Acrylon® fiber skirt, boots, underwear (sports bra and thong), as well as her docweasel hoodie are pretty much impervious to the elements and meant to last as long as the action figure itself (which has a life-expectancy of centuries of normal use, and a power-core half-life of 4000 years) barring catastrophic crushing damage.

The figure and its clothing are rated to endure temperature ranges of 1370°C (the temperature at which steel melts) to 1° Kelvin (near absolute zero).

This release is the 8th of 12 Combat Series models still in production. Of course, all true fans of AW anxiously await the next generation Action Weasel series, tentatively dubbed the “Falcon Series”, still in the developmental stages and about a year from beta testing. Purportedly, the nano-jet engines will allow flight up to sub-orbital altitudes at speeds approaching Mach II, but environmental and regulatory issues with the nuclear powered core have hampered R&D for this series. Hopefully all the glitches and governmental red-tape will have been resolved in time for the announced 2024 release.

[ed: we’ve all heard the also long-rumored plans for a life-sized series by 2026, but no information has been released by docweaselcorpTM on this very “dark” operation. Safety concerns and ethical considerations will be a major factor in the final disposition of that series, if it ever is realized and goes into production. AW fanboys and internet tech mags, lacking real information on this supposed project and forced to rely on conjecture and speculation, have labeled it the “Prometheus Series”.]

#8 docweaselgirl® action figure is another impressive addition to the Action Weasel Combat Series and a must-have for any serious docweaselTM action figure aficionado’s collection. Available at Weedy’s, Ken Mortman Stores and Duvall Shirley Collectables, as well as the docweasel online store. Suggested retail is $33,779.99 USD.