Why do liberals always sound like America’s worst enemies?

YIFY at the movies rating the films

Psychology behind women posting explicit images of themselves on social media

Myths of Beauchamp live on. 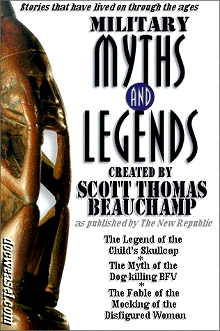 TNR is seizing on one detail in the Beauchamp documents released by Drudge: Beauchamp never does recant the stories. He just says he won’t say anything either way, defending nor denying them. TNR and Foer is using this as justification to further criticize the Military as the bad-guy stone-walling.

They point out there were military personnel in the room with Beauchamp during the phone call, insinuating he was under duress. So the upshot is, we don’t know what Beauchamp’s present stance is on the veracity of the stories. TNR won’t back away from the stories for several reasons that come to mind: they’ve been burnt by the Steven Glass story and others wrecking their credibility, they don’t want another.

Next, the stories are too in line with their worldview and ‘narrative’, shared by most of their readers, bashing the military. They like that story and hate to have to destroy it.

Lastly, pushback against the righty blogs that have driven this story. It would be yet another win in the search for truth by the right against the LSM®, after Memogate, the Reuters fauxtography story, Eason Jordon and others. This must be avoided to the bitter end, and the TNR dead-enders plan on brazening it out as long as Beauchamp enables them: and he presently is.

Michael Yon thinks Scott Beauchamp has been through enough and we should all just leave him alone:

The commander said I was welcome to talk with Beauchamp, but clearly he did not want anyone else coming at his soldier. LTC Glaze told me that at least one blog had even called for Beauchamp to be killed, which seems rather extreme even on a very bad day. LTC Glaze wants to keep Beauchamp, and hopes folks will let it rest. I’m with LTC Glaze on this: it’s time to let Beauchamp get back to the war. The young soldier learned his lessons. He paid enough to earn his second chance that he must know he will never get a third.

I disagree and here’s why= he refused to out and out recant the stories. He’s giving TNR an out, after publishing and standing by the stories, to say, hey, he hasn’t said they aren’t true, therefore we are not culpable.

Sure, its great he’s standing by his buddies and staying in the warzone, but he is acting like that is the only important thing in the world- its not.

Soldiers fighting in a war are commendable. Its an important job. It is not the only important job. Writing and publishing false stories that hurt morale and hurt support for the war are just as damaging (if not more so, since they reach more people) than if he did something treasonous as a soldier or derelict of duty.

Spreading false stories that his comrades and he defiled children’s corpses, played games with combat vehicles killing dogs, and degraded and ridiculed disfigured civilians because the soldiers had become just that brutalized by war IS a dereliction of his duty.

He has only half redeemed himself. Yes I blame TNR, but Beauchamp is enabling their dissembling, and its despicable. He can’t have it both way.

“Hey, I just want to forget all this and do my job”

Well, you can’t “just ignore” it. You started a fire that only you can put out, Scotty. If he IS a stand-up guy, he needs to come out and say what really happened, and if he made it all up, part of atonement is saying so, plainly, not just walking away with a flip “let the public think what it wants”.

This part of the public thinks that Beauchamp is STILL a jerk and STILL undermining the mission. Being a soldier, even one in combat does NOT give you ultimate moral authority. In fact, NOTHING does. You still need to adhere to all the facets of morality and ethics to be considered truly repentant and redeemable (even Yon says the jury is still out on the guy).

That’s my take anyway. I respect Michael Yon immensely, but I disagree with him on this. Beauchamp’s duty is to tellt the truth, the whole truth and nothing but the truth about these pernicious stories.

Beauchamp is trying to have his cake and eat it too. According to transcripts of calls between TNR’s editors and Beauchamp, they relayed a message from his wife begging him not to recant. He has obliged. Now he gets credit for being a good soldier (now, at least, Yon remarks he was not always so) and gets to avoid any fall-out for being a lying traitor.

He is apparently trying to redeem himself for being a less than ideal soldier. If at some future time he’s planning on addressing the harm he’s done with his writing, good, but he has opportunity to do both right now, and the longer he waits the longer TNR can get away with defending his lies.

Yes, TNR editors are despicable propagandists, but Beauchamp wrote these articles and they’ll never be put to rest until he recants them. And until he does, he’s not standing up for and protecting the people to the right and left of him, as he claims he is.

via Cadillac Tight and Confederate Yankee Did I Mention Those Other TNR Investigation Documents?